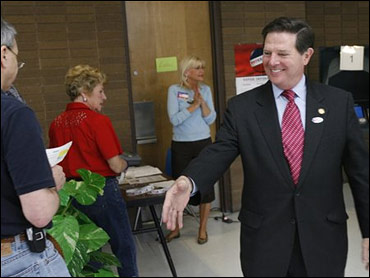 It was a victory only a mother could love.

Florida State's Bobby Bowden sneaked away with career victory No. 300 on Saturday night as the top-ranked Seminoles rallied for a 17-14 decision over Clemson in major-college football's first father-son coaching matchup.

In the weeks leading up to this historic game, Ann Bowden said she was rooting for her husband of 50 years to win, but in a close game against her son, Tommy Bowden.

"This is what Ann wanted, not me," relieved Bobby Bowden said. "I'm just glad it's over so people will stop asking me about it."

Tommy was a gracious loser, and even kidded with his parents during the postgame news conference.

"She's a traitor," he said, smiling. "I've said that she wasn't my mother, she was my father's wife."

Then he called out to them: "Where's she going? Heck, you see him seven days a week. What about me?"

Ann Bowden, wearing a half-Florida State, half-Clemson sweatshirt, then walked up to the podium and gave Tommy a hug.

"To get that close, I'm very proud of this team," Tommy, in his first season at Clemson, said. "My father has 300 wins and has won 10 games a record 12 years in a row. They come back. They have weapons."

With star receiver Peter Warrick back in the lineup after his legal case was favorably resolved on Friday, the Seminoles (8-0, 6-0 Atlantic Coast Conference) were more lucky than good in beating the Tigers before a record crowd of 86,200 at Memorial Stadium.

Warrick caught 11 passes for 121 yards, and Sebastian Janikowksi's third field goal a 39-yarder with 5:26 left broke a 14-all tie and kept Florida State alive in its drive for the national championship.

Clemson (3-4, 3-2) had its bid to send the game into overtime ended when Tony Lazzara's 42-yard field goal attempt fell short with 1:57 left in the game.

When the game ended, Bobby Bowden was hugged by several of his players, then lifted on their shoulders as the group made its way to midfield to meet Tommy Bowden.

At the center of the field, father and son were pressed together by a horde of photographers. They spoke briefly before heading off the field accompanied by security guards.

Asked if he though his team was still No. 1, he added: "We probably are, but I don't think we played like it."

On a day of upsets No. 3 Nebraska, No. 9 Michigan, No. 10 Alabama and No. 11 Michigan State lost the Seminoles came back from a 14-3 halftime deficit.

In the final 15 minutes, the defenses took over, but Florida State managed to put together a winning drive. Weinke, who was 24-of-49 for 258 yards, hit Ron Dugans for gains of 7, 7 and 22 yards to set up Janikowski's game-winner.

Warrick pleaded guilty Friday to misdemeanor petty theft in connection with a department store scam last month. The Heisman Trophy contender missed the Seminoles' last two games when he was suspended in accordance with school policy when he was charged with a felony. Pleading guilty to a reduced charge allowed him to play against the Tigers.

While he did catch 11 passes, he dropped at least four.

"Pete had a couple of times to win the darned game," Bobby Bowden said. "I've never seen Peter do what he did tonight since he was a freshman. But that was probably the way it should be."

Many of the Bowden clan were at the game, including a dozen or so grandkids, and they saw father and son go at each other with a vengeance. The Tigers were called for three personal fouls, the Seminoles nearly knocked Clemson quarterback Woody Dantzler out of the game, and there were penalties galore a combined 20 for 173 yards.

And, of course, there was a bit of trickery. Tommy ordered a fake punt that kept alive a drive that resulted in a touchdown. In the final quarter, it was a dipsy-doodle Dantzler (102 yards passing, 86 yards rushing) to Travis Zachery to Rod Gardner, who completed a 14-yard pass to Dantzler that went to the Florida State 44. It set the stage for a potential game-tying field goal, but Lazzara was well short in his attempt.

Tommy Bowden wasn't concerned with that score, but said his team is getting closer to a big victory.

"They're No. 1 and we came a lot closer than the last few times weve played them," Tommy said. "I think our players saw that they could play with them tonight."

The 69-year-old Bowden, who began his coaching career at Samford in 1959, never thought he'd be at this coaching stuff so long. But when he arrived at Florida State in 1976 after six years at West Virginia, he found a home and built an empire.

He turned a program that had considered dropping football into one of the most formidable in the country, especially over the past dozen years. Bowden's Seminoles have finished in the top four of the AP poll and won at least 10 games in every season since 1987, capturing the national championship in 1993.

Bowden, with folksy charm and honesty that has parents of high school stars lining up to sign on with Florida State, has won 227 games at Florida State, and his Seminoles are 105-13-1 in the 1990s, the most wins in any decade by a major college team.

This latest one, though, may have been his toughest.