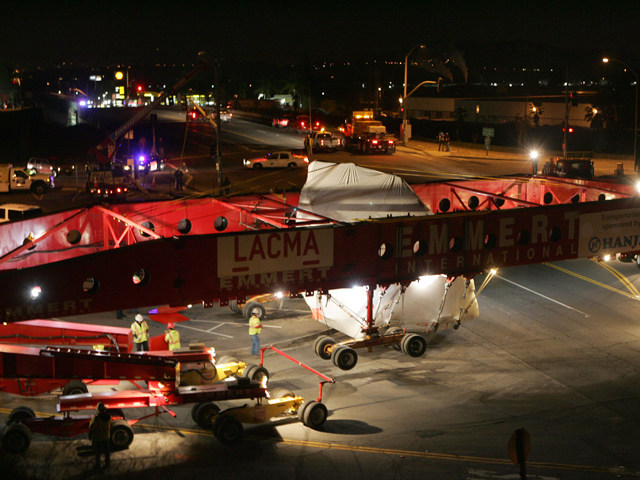 (CBS News) There is some unusual work of art that's getting a lot of attention. As CBS News correspondent Bill Whitaker reports, the concept is bold and the medium -- "boulder."

Night and day, southern Californians are coming out to get a glimpse and a picture of the latest sensation.

A two-story, 340-ton boulder of California granite actually, swaddled in fine Egyptian cotton, shrink-wrapped in white plastic, cradled in a specially-built carrier for its procession from this quarry in Riverside, California to the Los Angeles County Museum of Art. There it will take center stage in a new work called "Levitated Mass."

Frank and Angel Oporto live close to the quarry. "It's kind of exciting," said Frank.

"Things don't really happen around here too much that brings everybody out like this," said Angel.

To avoid traffic, it travels at night. So big -- the truck is 300-feet long -- it moves about five miles an hour.

"We're walking at about the speed this thing would move?" Whitaker asked Mark Albrecht, who has been planning this move for eight months.

"People say it's a boulder, it's a piece of art. When you look at it, what do you see?" asked Whitaker.

"The utility lines that have to be taken down are just enormous. Just on the ground for the operation is over 60 people," he said.

It usually takes about 45 minutes to drive from here to Los Angeles, but something this big can't just jump on the freeway, so it's taking a more circuitous route, one that will take 11 days. To avoid overpasses and weak bridges, it's traveling 105 miles through four counties and 22 cities.

The artist, Michael Heizer, shies away from the public, but his art is bold. Michael Govan, director of the Los Angeles County Museum of Art, says the boulder will sit atop this "V" shaped trench, so visitors can walk beneath Heizer's creation.

"What he really loves to do is make things of great scale that have a powerful feeling to them. And this is one of those things," Govan said.

It's costing the museum $10 million -- a price it's willing to pay for L.A.'s newest and biggest rock star.