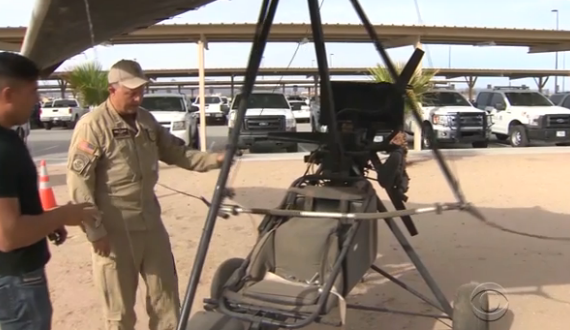 YUMA, Ariz. -- Along the U.S.-Mexico border, an air war is underway between drug cartels and federal agents.

One of the most powerful tools to protect the border is suspended high above the Arizona desert.  Agents call it their eye in the sky.

The Tethered Aerostat Radar System -- or “TARS” -- monitors the entire U.S.-Mexico border. Six blimps, from Arizona to Texas, carry specialized radar that can detect aircraft flying too low for conventional radar to see.

That includes drones -- and homemade, low flying planes, that smugglers use to deliver drugs over the border.

Agents say some aircraft are equipped with drop baskets so smugglers can dump their payload to cartel members inside the U.S.

“Our law enforcement operators that see that on the radar and get the drugs, get the bad guys that are waiting for the drugs,” said Rob Brown the TARS program manager

The TARS radar images are sent to this military base in California, where officers watch for potential threats.

Once something is spotted, Border Patrol teams can be in the air within three minutes.

If a smuggler makes it over the border -- agents say, the TARS technology helps track down the drugs before it gets into the wrong hands.