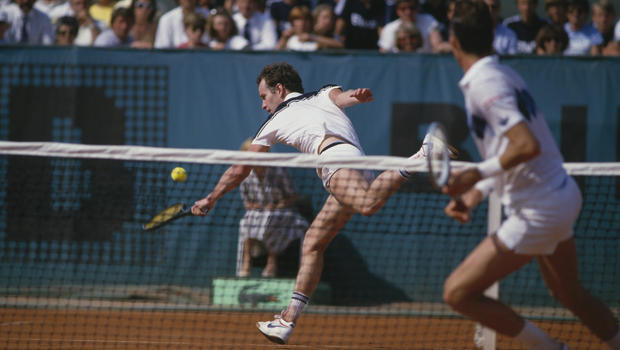 Former tennis champion and bestselling author John McEnroe brings his uncompromising commentary from the sidelines of Wimbledon and other Grand Slam tournaments to his new book, "But Seriously" (Little Brown), a brutally honest memoir in which he writes with characteristic brazenness about the sport, broadcasting and fatherhood.

In the excerpt below, McEnroe replays his 1984 French Open match against Ivan Lendl, which would prove to be one of his worst days on court, in no small part due to his behavior and how it soured the crowd.

I wake up in a sweat. My pillow's damp and I don't know what day is. Did I miss the match? Am I playing later? For a few seconds I don't even know where I am. Then it hits me. I already played the match. I already lost it. Jesus, it was back in 1984 and I'm still haunted by it. Even now, more than thirty years later, I'm as hot as I was in the fifth set and I can taste the red clay on my tongue.

It was a match I should have won and it turned into the worst loss of my career. I'd been playing my best tennis ever, I was undefeated that year, and although serve-volleying wasn't the obvious way of winning the French Open on the slow clay of Roland-Garros, I was playing Ivan Lendl. Ivan had so far lost four Grand Slam finals in a row and I sure as hell wasn't planning on breaking that run for him by handing him his first title. In fact, I was planning on beating his ass.

At first, that's exactly what I did. After two sets, I was up 6-3, 6-2, and I was all over him. The crowd was behind me, "Allez, John! Allez." As far as I was concerned, I was in control, I had this in the bag. But as it got hotter, the crowd started losing focus.

Then my friend Ahmad Rashad -- a great former wide receiver for the Minnesota Vikings -- who was there rooting for me, got up to leave. "You got this, Mac! I'll see ya back at the hotel." S***, the last thing I needed was a jinx. It's an unwritten rule in sports that friends and family don't leave until the match is over. Not that I'm blaming Ahmad for the loss, but that's when little doubts started creeping in for the first time. I still thought I was going to win but those negative thoughts began to get to me.

Everything suddenly became a distraction. At the next changeover I couldn't help but notice the noise from a nearby cameraman's headphones. Someone was obviously trying to get this guy's attention. The third set had barely started when, I swear to God, I heard something like, "When the match is over, we'll focus on John and then stick with him through the trophy ceremony. He's got this, so make sure he's in the shot."

In English. In Paris. It was the American TV cameraman listening to the producer's instructions in his headphones, but they were so loud I could hear them too. Unbelievable! Now I was feeling even more jinxed. So I walked to the guy's chair, grabbed the headphones oﬀ his head, and screamed as loud as I possibly could into his mic: "SHUT UP!" I knew immediately that my frustration wasn't a good enough reason for me to do this, and while I didn't care about the cameraman, I did care about the crowd. I needed them. But they sure as hell didn't need me and my bad attitude. That was the point when they turned on me. They just wanted the match to go on -- who could blame them -- and what better way than to change corners and root for my opponent? After all, that French crowd was known for being fickle. I tried to block them out. I was still the best tennis player in the world and there was no way I was losing to Lendl.

I failed to break his serve at 2–2 in the third, despite him being 0-40 down. No matter. I still had my mojo. I was still convinced I could win this thing, all I needed to do was stick with my game plan: serve-volley, and break him -- as soon as possible. Except he won the set 6-4. I had to pull it together. I reminded myself I was two sets to one up; better than him. "Don't panic. Don't let the heat get to you. Don't let these people get to you. They know I can beat this guy. I know I can beat this guy." But it didn't happen. In the fourth set, I found myself serving, 4-3, 40-30. I'd broken him and was five points from the title. I really thought I could close it out. But in the heat of the moment, my normally soft hands pushed my first volley a fraction beyond the baseline. Somehow, in the blink of an eye, the set was over. He'd won it 7-5 and we were now two sets all.

In the fifth, the heat became stifling, Lendl's confidence ignited, and the crowd got behind him. My legs felt more and more like Jell-O and, with my strength draining fast from my body, I lost my grip on the match. I tried and tried, but in the end, I was the one walking to the net with my head down, while Lendl was smiling goofily, his hands up, jumping around as he sealed his first Slam title.

Does it surprise you that I still have that nightmare, all these years later? It wakes me up every year when I'm in Paris, commentating on the French Open -- at least once, usually twice. But every time I have this bad dream, it's a little easier to get over. Maybe I've gained some perspective on this dark moment in my career. Maybe time does heal all wounds. But any way you look at it, this was the closest I ever came to winning this clay-court major. Thankfully I've had a couple of small chances for revenge since then (although let me be clear: nothing could EVER EVER EVER make up for what happened that day). The first was in October 2010. And it was in Paris. That morning when I awoke I didn't have to have the nightmare, because after eighteen years, I was finally going to be playing Ivan Lendl again. For me, it was a big deal to meet him on court once more. My chance to get one back on him. I'm not kidding. That  1984 Roland-Garros defeat still burned my guts. We'd come up against each other on a number of occasions since then; sometimes I'd won, mostly I'd lost. We'd last played each other on the main tour back in 1992 in Toronto, but by then we were both on the downward slope of our careers, so it hadn't felt like a proper opportunity for payback. Once I started on the seniors circuit, there was a long period where Ivan was kept oﬀ the court because of a clause in an insurance policy that looked like it would stop him from ever playing again. But somehow that got ironed out. So now, in the city where I'd suﬀered the most painful loss of my career, I finally had the chance to lay that ghost to rest -- the one that had been haunting me for twenty-six years.

From "But Seriously" by John McEnroe, published by Little, Brown. Copyright (c) 2017 by John McEnroe. Reprinted with permission. All rights reserved.