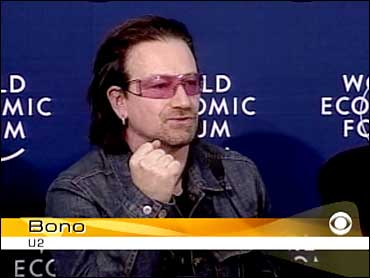 Rock star and activist Bono launched a new push to fight HIV and AIDS in Africa on Thursday, unveiling a partnership with American Express and other companies to offer products under a brand called "Red," some proceeds of which will be funneled to the cause.

said the denim-jacketed U2 front-man (video)
, who was flanked by Italian fashion tycoon Giorgio Armani and corporate executives who joined him for the announcement at the World Economic Forum in the Swiss ski resort of Davos.

The project, called "Red," will market red-themed products from Converse footwear, Gap clothing and Giorgio Armani, as well as a red American Express card to be offered initially only in Britain, as of next month.

Products branded "Red" will include sports shoes, T-shirts and sunglasses — some produced in Africa, some with African materials. A slice of the revenue — numbers vary by company and product — will go to the Global Fund to Fight AIDS, Tuberculosis and Malaria.

"We sought out iconic companies who make iconic products," said Bobby Shriver, who runs an organization called DATA — or Debt, AIDS and Trade in Africa — and has been working with Bono for several years.

But he quickly turned serious, his voice cracking slightly as he recounted the story of an HIV-positive young African who chose to take his single dosage of anti-retrovirals himself, denying the critical drug to his girlfriend and possibly condemning her to death.

"We're losing in the battle ... Maybe it's an Irish macho thing, but I really don't like losing," the Ireland native said. "I'm calling it conscious commerce for people who are awake, people who think about their spending power and say: 'I've got two jeans I can buy. One I know is made in Africa and is going to make a difference and the other isn't. What am I going to buy?' "

American Express marketing chief John Hayes said the new American Express card — whose backside proclaims the goal of "eliminating" HIV in Africa — will transfer 1 percent of all purchases made with it to the project.

In an interview with The Associated Press, Bono alluded to the potential discomfort with his new alliances.

"We're fighting a fire. The house is burning down," he said. "Let's get the water. You end up beside somebody who lives up the road who you don't really like. Do you really care if he's polishing up his image (by) putting the fire out?"

At the news conference in Davos, Bono added, "Maybe we can, if not go mainstream with our issues, let's be slipstream. Let's surf on the back of the wake of these companies. And, I tell you, it won't be long before our surfboard is moving at its own speed, on its own wave."

Richard Feachem, executive director of the Global Fund, said that to date, "a very small proportion" of the fund's current $4.7 billion comes from corporations or individuals, but that he had concluded that depending on governments was not enough.

The Global Fund was created to finance a dramatic turn-around in the fight against AIDS, tuberculosis and malaria. To date, the fund has committed funding to 128 countries to fight the three diseases.

"We've announced today a launch with four companies (but) we need 400," he said, adding that success would also depend on whether American Express extends the Red card line to the United States as well.

"If we succeed," Bono interjected. "But we could fail. If people are jaded or cynical ... or genuinely not interested, then we fail. But we've tried. I think we've come up with a sexy, smart, savvy idea that will save people's lives.

"It is sexy to want to change the world, not to leave it as it is."

Tuesday in Baden-Baden, Germany, Bono was presented with the German
Media Prize for 2005. The jury of German editors in chief honored Bono for his "tireless struggle against poverty in Africa and his fundamental belief that (nations in) Africa have a right to be on the same level as other countries in a peaceful world."

"I would have never imagined that, within 10 years, there would be less freedom in Egypt than under Mubarak's era," one pro-democracy activist tells CBS News.