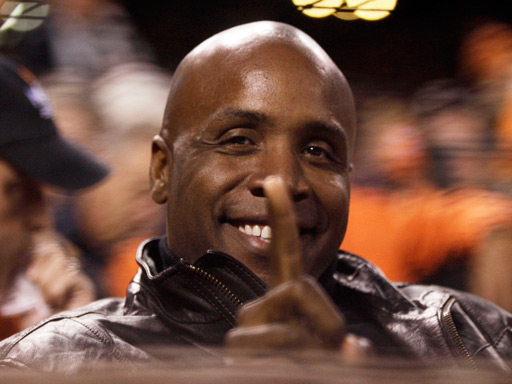 SAN FRANCISCO - In March 2003, Barry Bonds' business partner and personal trainer stood in front of the slugger's locker in the San Francisco Giants clubhouse and appeared to discuss steroids and needles.

The business partner, Stevie Hoskins, secretly recorded the conversation with the trainer, Greg Anderson, and later turned it over to federal investigators.

On Friday, Bonds' attorney will ask U.S. District Judge Susan Illston to prohibit the recording from being played during the former player's perjury trial, scheduled to begin March 21 with jury selection.

Prosecutors want the jury to hear the tape to bolster their case that alleges Bonds lied to a federal grand jury when he denied knowingly taking performance enhancing drugs.

Prosecutors allege that Anderson can be heard in the recording boasting about supplying Bonds with a new steroid designed to evade urine tests. The prosecutors plan to show the jury the results of a urine test collected from Bonds in 2003 as part of Major League Baseball's inaugural testing program that included all players.

Bonds' test initially came back negative. But prosecutors went back and tested it after famed anti-doping chemist Don Catlin developed a test for the designer steroid THG, which allegedly showed up in Bonds' urine. They say the Hoskins recording shows Anderson discussing Bonds using THG

A ruling for Bonds would be another blow to the prosecution. On Thursday, the government pared down the number of charges from 11 to five, although the Major League Baseball home run leader still faces the same punishment he always has.

Each count carries a potential sentence of 10 years in prison. However, federal sentencing guidelines for a first offense on these charges generally call for a total sentence of 15 to 21 months.

"But the whole thing is ... everything I've been doing at this point, it's all undetectable," Anderson is recorded as telling Hoskins as the Giants' Benito Santiago walks by and the two lower their voices, according to prosecutors. "See, the stuff that I have ... we created it. And you can't buy it anywhere. You can't get it anywhere else. But you can take it the day of and pee. ... And it comes up with nothing."

Bonds' attorneys argue that the tape should be inadmissible because Anderson is refusing to testify at the trial. Anderson has said through his lawyer that he would rather go to prison on contempt charges than testify against Bonds. So Bonds' attorneys argue that the recording is unreliable without Anderson's testimony attesting that it's him on the recording discussing injecting Bonds with steroids.

They dismiss as inadequate prosecutors' plan to have Hoskins and lead investigator Jeff Novitzky explain to the jury what Anderson and Hoskins are discussing. Prosecutors allege Anderson and Hoskins were whispering so as not to be overheard, which supports the theory the two were discussing illegal performance enhancing drugs. But Bonds' attorneys said that without Anderson's testimony, prosecutors can't establish the often obtuse and disjointed conversation was about injecting Bonds with illegal steroids.

That Anderson spoke in low tones in a private setting hardly establishes a knowledge of illegality, particularly since, as the recording makes clear, the conversation as a whole turned at many points to "patently innocuous events," Bonds' attorney wrote in a Feb. 4 court filing. "The statements themselves, moreover, are difficult to discern. And they are far more ambiguous than those considered trustworthy in the cases cited by the government."

According to prosecutors, Bonds' father "did not that believe that his son was using steroids" so Hoskins decided to offer him recorded proof. Hoskins turned over the recording to prosecutors after they began investigating Bonds for allegedly lying to the grand jury in December 2003.