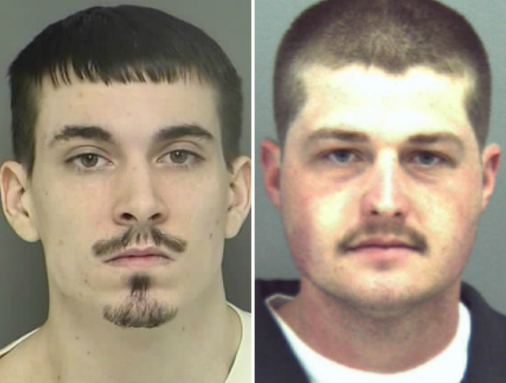 RICHMOND, Va. -- Two Virginia men accused of trying to buy guns and explosives to use in attacks on synagogues and black churches are too dangerous to release while they await trial, a judge ruled Thursday.

He told Doyle: "The evidence is strong, and that does not cut in your favor."

Doyle, 34, and Chaney, 33, are charged with conspiracy to possess firearms after being convicted of felonies. Their case now goes to a federal grand jury, which meets Dec. 1.

An affidavit filed by FBI agent James R. Rudisill to support the criminal complaint says Doyle and Chaney are white supremacists who tried to buy an automatic weapon, explosives and a pistol with a silencer from three undercover agents posing as gun dealers. Chaney was arrested Sunday after he handed the agents an undisclosed amount of cash for the weapons. Doyle, who was being electronically tracked by authorities, was arrested nearby.

Charles D. Halderman, an associate of the two men, is charged with conspiring to rob a Richmond-area jeweler to raise money that the men would use to buy land, stockpile weapons and train for a race war. His preliminary hearing is set for Friday.

Rudisill took the witness stand and largely reiterated what he wrote in the affidavit, but a few new details emerged. According to his testimony:

The affidavit says the FBI learned that Doyle planned to host a meeting at his home in late September to discuss "shooting or bombing the occupants of black churches and Jewish synagogues, conducting acts of violence against persons of Jewish faith, and doing harm to a gun store owner in the state of Oklahoma."

FBI surveillance determined that the meeting took place as scheduled. Chaney's lawyer, Elliot Bender, said in court Thursday that there was no evidence anyone talked about a criminal plot at that Sunday afternoon gathering, which could have been just to watch football on television.

About a month later, the affidavit says, Doyle and Chaney met for the first time with an undercover agent to discuss buying weapons.

According to Rudisill's affidavit, Doyle and the younger Chaney "ascribe to a white supremacy extremist version of the Asatru faith," a sect that emphasizes Norse gods and traditions.

Mark Pitcavage, director of the Anti-Defamation League's Center on Extremism, said in a telephone interview that practitioners of that form of paganism are often referred to as Odinists and there are tens of thousands of them across the country. Using Norse traditions and beliefs, they created what Pitcavage called a "white warrior religion." Odisism is popular in prison gangs, but there are also many groups beyond prison walls in Virginia and elsewhere, he said.

"These are people who are warriors for the white race," he said.

He said it's likely that the men -- all of whom have extensive felony records, according to the FBI -- became white supremacists in prison.

Doyle's ex-wife, Sabrina Winn, said their eight-year marriage "was a nightmare" for her because of his drug abuse and constant run-ins with the law, but she never saw any hint of racism.

"It wasn't a surprise to me he was coming up with some grand plan to do something, but I was surprised it was about race," Winn, now remarried, said in a telephone interview. "He had black friends."

She said she has not seen Doyle since shortly after their split in 2008, when he drove by her house and left papers in the mailbox saying he was withdrawing a petition to gain custody of their son.

"My family is extremely relieved that he is behind bars again," she said.

Chaney's former girlfriend told CBS affiliate WTVR she was shocked to learn about his arrest.

"He's a sweet guy, like, I would've never really thought of this at all," Kristi Leigh said. "We all had a good time. We were always happy."

Leigh told WTVR she met Chaney earlier this year and that he was trying to turn his life around, working as an electrician. She called Chaney a respectable person who showed no sign of racial hatred. She added her brother-in-law is black, and Chaney never had an issue with him. She said she never heard Chaney discuss the other suspects arrested in this case.

"I don't know who they are," she said. "I didn't even know their names. And he would tell me names about everybody, but I've never heard of their names.

She said they ended their relationship two weeks ago.