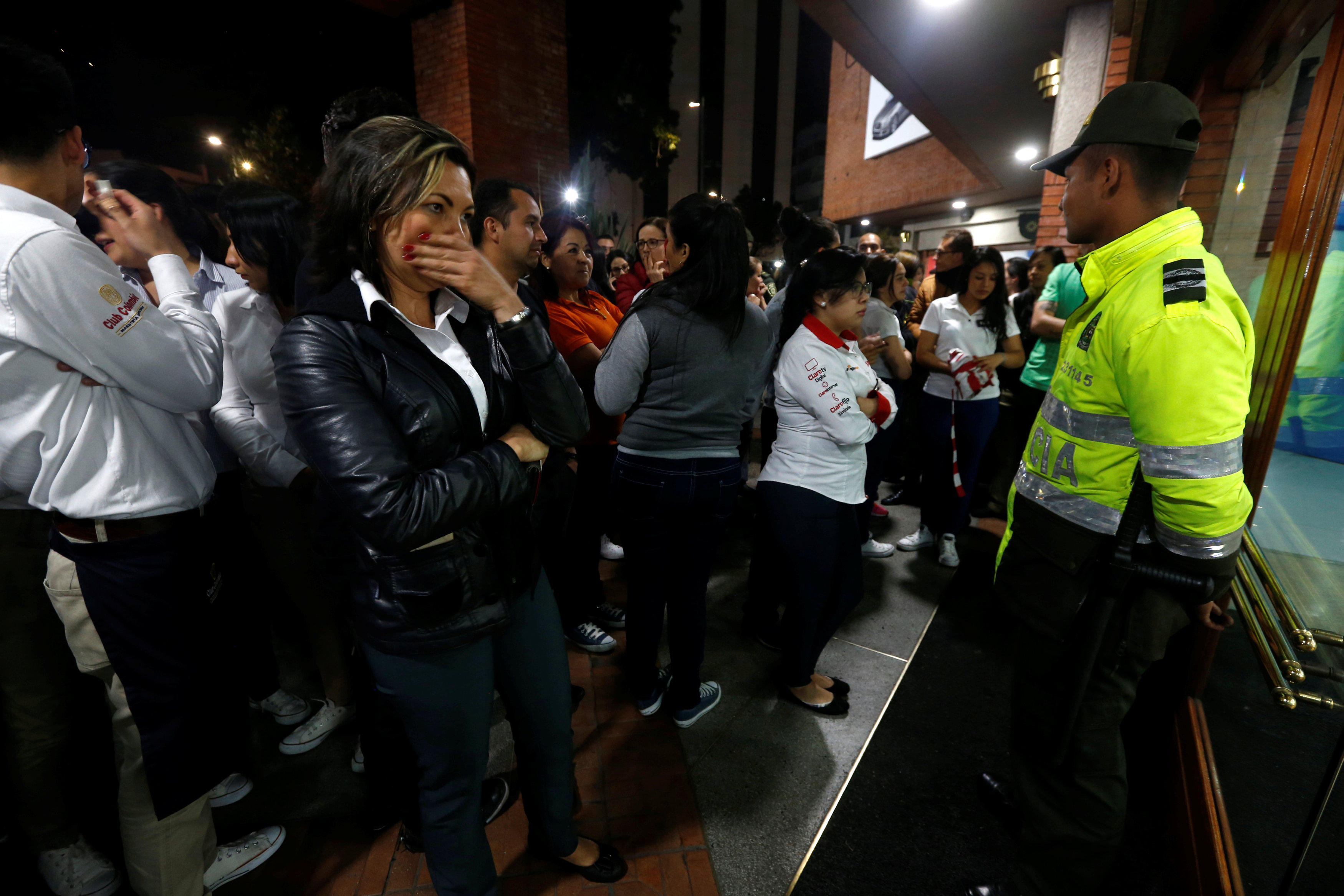 BOGOTA, Colombia -- A homemade bomb placed in a women's bathroom rocked one of the busiest shopping centers in Colombia's capital Saturday, killing three people, including a French woman, and wounding nine others.

Witnesses told of being evacuated from movie theaters and stores after the blast at the upscale Centro Andino in the heart of Bogota's tourist district. Ambulances and firetrucks rushed to the scene and the injured were taken to a hospital, where two later died.

Police said a potent explosive, possibly made of ammonium nitrate, had caused the destruction.

Mayor Enrique Penalosa called it a "cowardly terrorist bombing," and attention immediately focused on the National Liberation Army, which is the last rebel movement still active in Colombia. The group, known as the ELN, carried out a spate of recent attacks against mostly police targets in Bogota, but leaders denied involvement in the latest bombing.

President Juan Manuel Santos made a late-night visit to the shopping mall, where he strongly condemned the attack but declined to speculate on who was behind it. He said he would meet with top security advisers Sunday before heading out on a previously-scheduled tour of Europe that includes a planned visit to France.

"The best answer to cowardly terrorism is to not let it unnerve us," he said. "The French know perfectly how to respond to these terrorist attacks and we Colombians too have the will not to let ourselves be intimidated."

Penalosa said the 25-year-old French victim, identified as Julie Huynh, had been in Bogota the past six months volunteering at a school in a poor neighborhood. He said she was preparing to return to France in the coming days in the company of her mother, who was with her in Bogota.

In a cruel irony, Huynh worked with a French-backed charity helping people displaced by Colombia's long conflict gain the skills and expertise needed to rebuild. A member of the group, Proyectar Sin Fronteras, declined to comment when contacted by The Associated Press, but the group posted on its web page a black ribbon in memory of Huynh.

The ELN, which is engaged in long-running peace talks with the government, rejected accusations it was behind the attack.

"We ask for seriousness from people making unfounded and reckless accusations," ELN negotiators at peace talks taking place in neighboring Ecuador said on Twitter. "This is the way people are trying to tear up the peace process."

The ELN in February claimed responsibility for a bombing near Bogota's bullring that killed one police officer and injured 20 other people. But the group said it doesn't target civilians.

Penalosa urged residents of Bogota's wealthier districts to be on high alert but cautioned that there was no hint of other attacks being planned.

The government last year reached a peace deal with the Revolutionary Armed Forces of Colombia, which was much bigger than the ELN. Some analysts attribute an uptick in violence in Colombian cities to the ELN's desire to wrest concessions from the government at the negotiating table.

Bogota has seen dramatic improvement in security over the past decade as the country's long-running conflict has wound down. But the capital remains vulnerable to attacks as residents have let down their guard

Still, the Andino shopping center would seem a difficult target. All vehicles entering the parking garage are screened by bomb-sniffing dogs and security guards are present throughout the mall -- a lasting legacy of the days more than two decades ago when drug-fueled violence was at its peak.