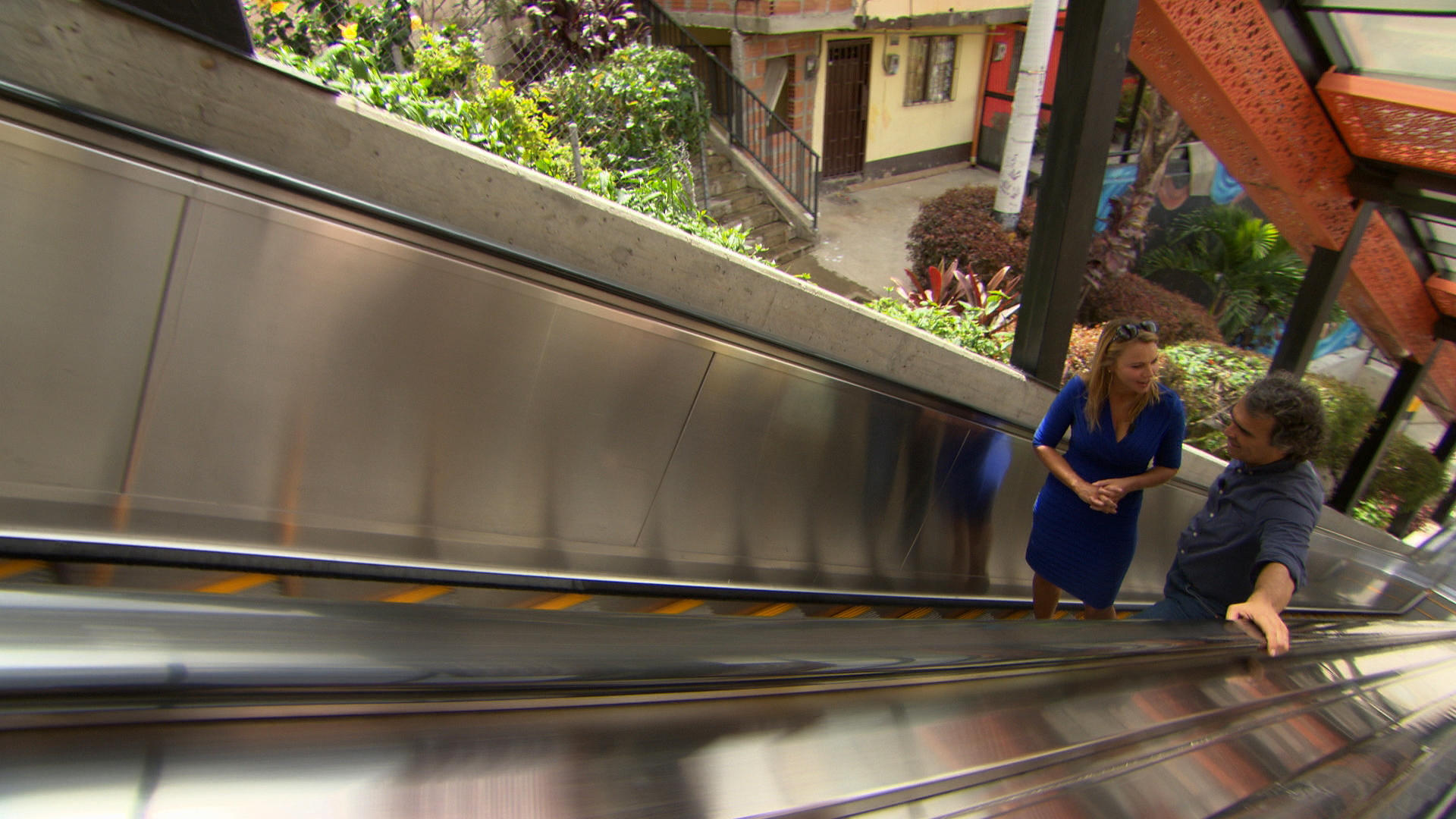 The following is a script from “The New Colombia,” which aired on Dec. 11, 2016. Lara Logan is the correspondent. Alan B. Goldberg, producer.

For more than half a century, Colombia was one of the most violent and isolated countries on Earth.  Infamous for cartels, cocaine, and kidnapping.  The Revolutionary Armed Forces of Colombia or FARC fought the government in the longest running war in the Western hemisphere.   Until recently, when Colombia achieved what many thought was impossible. The war is effectively over, the country transformed.

How do you end a 52-year war that left 220,000 dead and millions displaced against a revolutionary army dedicated to overthrowing the government? Billions in U.S. aid helped. But the Colombian military came up with one of the most unusual ideas in modern warfare: an advertising campaign. They hired a creative ad executive, Jose Miguel Sokoloff, to convince thousands of fighters to give up without firing a shot.  How did Sokoloff do it? With soccer balls and Christmas trees.

Jose Miguel Sokoloff: Advertising is a very, very powerful force. In the good you can do by changing minds of people in certain ways.

It was the power to change minds that brought Colombia’s deputy minister of defense to Jose Miguel Sokoloff’s ad agency in 2006. The military had brought the FARC to their knees and were looking for a new weapon to end the war. So they asked Sokoloff -- one of the world’s top ad men -- to create a series of campaigns and TV commercials to convince the guerillas to surrender and the Colombian people to accept them back.

Jose Miguel Sokoloff: This gives us the chance to apply our skills to something that is fundamentally important to us, to our kids, to our country.

In December 2010, they launched “Operation Christmas” which they filmed for commercials that played on local TV. At great risk, Black Hawk helicopters carried two of Sokoloff’s colleagues -- led by Colombian Special Forces -- into rebel territory.  They found nine, 75-foot trees near guerilla strongholds and decorated them with Christmas lights.  Each tree was rigged with a motion detector that lit up the tree and a banner when the guerillas walked by at night.  It read: “If Christmas can come to the jungle, you can come home. Demobilize.  At Christmas, everything is possible.”

Jose Miguel Sokoloff: What we did was try to make coming back home for Christmas an important thing. And we knew that if we put up these Christmas trees with that sign up there, we would touch the hearts of the guerrillas, ‘cause my heart was touched. And they went and they did it.

Lara Logan: And it worked?

He said 331 guerillas—roughly five percent of the rebel force at the time—demobilized:  they came out of the jungle and gave up.

Lara Logan: This is spectacular.

Like most Colombians, Sokoloff was born into war and grew up here in Bogota without knowing a day of peace.

Lara Logan: In the beginning, what was the purpose of the campaign?

Jose Miguel Sokoloff: It was always exactly the same: Demobilize as many guerillas as possible.

As with any ad campaign, they began with research. Their focus group: Former guerillas. Sokoloff’s team tracked them down and interviewed them.

Jose Miguel Sokoloff: We found the common denominator of all those stories is that a guerilla is as much a prisoner of his organization than the people he holds hostage.

Lara Logan: There was no way out?

Jose Miguel Sokoloff: There was no way out. And it certainly softened me up when I heard these stories. And I said these poor people.

Lara Logan: And you never expected that you would feel that way?

Jose Miguel Sokoloff: I didn’t expect them to be so human.

But how do you reach your target audience when they are hiding in 150,000 square miles of jungle?  The rivers, they discovered, are the highways of the jungle. So they launched their second Christmas campaign, “Operation Rivers of Light.” They asked people in nearby villages to send messages and gifts to the guerillas which were placed inside capsules that glowed in the dark, then floated down the river.

Jose Miguel Sokoloff: So you just put them there and these lit up at night. And-

Jose Miguel Sokoloff: When you see that beautiful thing coming down the river, you can’t help but being touched by it.

Lara Logan: How many lights like that did you send?

One of the messages was from Colombia’s President Juan Manuel Santos, who was just awarded the Nobel Peace Prize for his efforts to end the war.

Lara Logan: And you did this with the Colombian military?

Jose Miguel Sokoloff: Absolutely, we couldn’t have done it without them.

Lara Logan: It humanizes them as much as you’ve tried to humanize the guerillas.

Sokoloff and his military partners never let up. They rolled out dozens of campaigns each uniquely designed to show the guerillas the way out with beams of light, stickers on trees and voices of ex-guerilla leaders booming across the jungle but no voice was more powerful than their mothers.

In 2013, Sokoloff found 27 mothers of guerrillas.  They gave his agency photos of their sons and daughters as young children that only they could recognize. During Christmas, flyers with those photos were placed all over the jungle.

Jose Miguel Sokoloff: And the message was before you were a guerrilla, you were my child. So come home because I’m-- I will always be waiting for you at Christmastime.

Lara Logan: We call that going for the jugular--

Jose Miguel Sokoloff: 218 people with this campaign gave up their weapons and came home and stopped shooting. So whatever number you get out is people that you don’t have to fight.

Lara Logan: What was your most successful campaign?

It was a passion shared by the guerillas who often stopped fighting during matches.  When Colombia hosted the Under-20 World Cup in 2011, Sokoloff kicked off a new campaign.  Soldiers armed with thousands of soccer balls entered stadiums and players, celebrities, and fans all signed them. They loaded them onto helicopters and threw them out over the jungle, each with a sticker that said “Demobilize. Let’s play again.”

Over eight years, 18,000 guerillas put down their weapons and came home, in large part because of Sokoloff’s campaigns.  The ads helped bring the FARC to the negotiating table in 2012. During the peace talks, Sokoloff said guerilla leaders asked the government to stop airing his commercials. Soon after they agreed to a ceasefire.

Jose Miguel Sokoloff: The energy was incredible. And that is what the world sees now of Colombia.

Colombia’s spirit, once buried by war, has risen again.  In the last 10 years, international investment is up over 100 percent. Tourism 240 percent. Not long ago, it was too dangerous to go out at night, now clubs in Bogotá are bursting with locals and foreigners.

Jose Miguel Sokoloff: Yeah, and that is Bogotá, which is probably not the best example of transformation. Medellin, Cali, all these other cities--

Jose Miguel Sokoloff: If you had been there 10 years ago and you go today, you would say, “This is a completely different planet.”

Medellin was the last place tourists would have come. At the height of the drug wars, it was the murder capital of the world, 6,000 a year. Now it is the jewel of Colombia.  Modern, cultural, reborn...it has been hailed as a model of urban innovation, mostly because of this man, Sergio Fajardo.

Lara Logan:  We saw people thanking you for transforming their lives and for what you’ve done. What does that mean to you?

Sergio Fajardo: I’m very proud. Because we have shown that hope can be built and things can be changed.

Fajardo was a math professor—a political novice—when he ran for mayor in 2003.  Without bodyguards, he dared to walk the poorest and most dangerous streets promising to end the violence and reunite the city. He won in a landslide.

Sergio Fajardo: What’s the power of violent people? Fear. And when you are-- feel fear, you are diminished as a human being. You are subjugated.

Sergio Fajardo: Divided. There is no sense of community. So we have to put the pieces together of our society. And we have to connect physically and mentally.

They connected the city through its public transportation system. We started our tour on a metro train that took us to Communa 13; a slum that was once the city’s bloody epicenter, where tens of thousands who fled the war now live because it sits on a steep hilltop. Fajardo’s urban planners took a bold step, they built escalators up the side of the mountain, the equivalent of 28 stories. If you wanted to build hope, this was a good place to start.

Sergio Fajardo: This is a symbol. Things can be done in the poorest part of town.

Beautifully designed, decorated, and landscaped, the escalators have literally lifted the spirit of the community. Fajardo convinced the wealthy and the poor to contribute to rebuilding Medellin.  From that came a cultural center, science museum, and botanical garden.

Sergio Fajardo: This was rundown. It was a place that people wouldn’t come. They would be afraid of coming out to this neighborhood.

Sergio Fajardo: Most of the day.

To get kids off the streets, he poured money into education with new schools and libraries.

Lara Logan: In the middle of one of the most violent--

Sergio Fajardo: Up to the--

No symbol has helped more than Medellin’s cable cars.  They soar over its mountain slums carrying 40,000 people a day, connecting the poor with jobs and opportunities in the city’s wealthier neighborhoods.

Lara Logan: And these places were pretty isolated before that?

Sergio Fajardo: They were. It was very difficult to get in here. You will never have someone from that part of town coming in here for any reason. And now, most people come to Medellin, they would want to come here to ride the cable car, to see what we did in here and to get a feeling of a transformation.

Colombia’s transformation remains a work in progress. Drugs and violence are still present.  But after several failed attempts, the country now has a peace deal with the FARC that was just passed by its Congress.

And Jose Miguel Sokoloff, he was publicly recognized by his client, Colombia’s ministry of defense, with its highest honor—that’s rarely awarded to civilians—for his creative advertising campaigns to help end the war.

Lara Logan: Normally in advertising, you always want to see your clients coming back?

Lara Logan: You nev-- you never want to get rid of them.

Jose Miguel Sokoloff: Yeah, this is--

Lara Logan: But in this case?

Jose Miguel Sokoloff: Here, the object of this campaign is to not have a client, is to-- to end this war and no need for any more of that anymore.

Lara Logan: So they don’t need you?

Jose Miguel Sokoloff: So they don’t need us anymore, yeah.