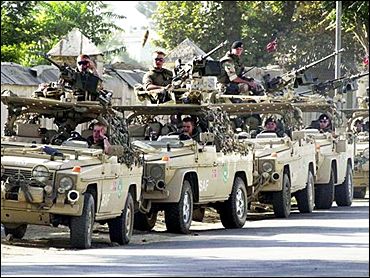 A series of bombs went off at a U.N. voter registration office in western Afghanistan, injuring six Afghan police, setting vehicles ablaze and shattering windows, police and the United Nations said Friday, the latest in a string of attacks targeting election workers.

The blasts occurred at about 8 p.m. Thursday at a voter registration site in Farah City, near the border with Iran and about 465 miles southwest of the capital, Kabul, said Mohammed Rasool Khan, the deputy police chief for the province.

U.N. spokesman Manoel de Almeida e Silva said there were six explosions in all. He said there were three international U.N. staffers at the site at the time, and none were injured.

The U.N. staffers had finished most voter registration work in the province and were to be moved to Herat, the province directly north of Farah.

"There were no casualties (to U.N. workers), but there was damage to the building and vehicles," de Almeida e Silva said.

"This confirms the concerns we have regarding security for the electoral process," he said, adding that the United Nations welcomed a decision by NATO to beef up its peacekeeping force ahead of the Oct. 9 vote.

"The sooner they get here the better," de Almeida e Silva said.

Khan said one bomb went off at the perimeter of the site, near a group of Afghan police who were standing guard.

Six injured police were being treated at a hospital in the city, some with serious injuries. The other blast went off inside the compound, damaging five vehicles and blowing out several windows.

Police have detained four security guards, two Afghans working for the United Nations, and a U.N. security guard for questioning.

It was not clear who was behind the attack.

Taliban militants have been blamed for a series of attacks on workers preparing the country for its first presidential vote. Scores of election workers and civilians have been killed in the attacks.

Still, U.N. officials say some violence in Farah and other provinces has been over drug-smuggling and other turf wars.

In other violence, militants attacked a police post in central Ghzani province, killing one officer and injuring two others, state television reported Friday.

Three militants and a civilian caught in the crossfire also died in the fighting Thursday in Rahman, a village 100 miles south of Kabul.