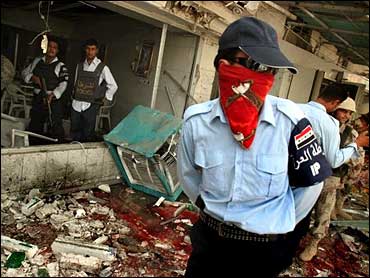 The bomber detonated a vest laden with explosives at about 2:45 p.m. in the Ibn Zanbour restaurant, just 400 yards from the main gate of the heavily fortified Green Zone.

Al Qaeda in Iraq, Abu Musab al-Zarqawi's terror group, claimed responsibility for the attack, and in a statement said the bomber blew himself up in a restaurant that was next door to the one where the victims died. The targets, according to the group, were police officers and what it called "spies and collaborators" who gathered there.

The statement also said the bomber was from the area of Iraq near the Syrian border targeted by a U.S. offensive over the past few days.