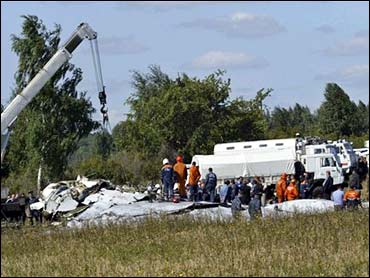 Russian officials said Friday that they had found traces of an explosive in the wreckage of one of two airliners that went down nearly simultaneously this week, as suspicion grew that the crashes were a terrorist act.

Investigators initially voiced skepticism over terrorism as a cause, but have increasingly acknowledged it is the leading theory for the crashes that killed 89.

Also Friday, a purported terrorist group claimed responsibility for the crashes on a Web site known for posting messages from militant Muslim groups. The claim could not be confirmed.

Meanwhile, CBS News has learned that investigators believe a female suicide bomber may have been the cause of one of the crashes.

CBS News Correspondent Richard Roth says investigators believe a woman was likely responsible - wearing an explosive belt that could have passed through security undetected unless she was frisked. Women in Russia rarely are.

Officials say a woman with a Chechen name is the only crash victim whose body has not been claimed, Roth reports, adding there is "no information" she was a terrorist.

The planes - a Sibir Tu-154 with 46 aboard and a Volga-Aviaexpress Tu-134 with 43 people - disappeared from radar almost simultaneously around 11 p.m. Tuesday. The Tu-134 was headed to the southern city of Volgograd and the other plane to the Black Sea resort city of Sochi, where President Vladimir Putin was vacationing. They had taken off about 40 minutes apart.

Thursday, Russia observed a day of national mourning, with one newspaper headline proclaiming: "Russia now has a Sept. 11."

A government commission appointed to investigate traveled Thursday to the site where the Tu-134 crashed, about 120 miles south of Moscow. Emergency crews have already completed their work there, but others continued to check the wreckage of the Tu-154 a few hundred miles south.

Russia's Federal Security Service - which is leading the crash investigation - told the ITAR-Tass news agency that traces of explosives have been found at one of the crash sites. FSS spokesman Sergei Ignatchenko is quoted as saying that a "preliminary analysis indicates it was hexogen."

The statement put on the Web site Friday accuses Russians of killing Muslims in Chechnya and is signed "the Islambouli Brigades." A group with a similar name has claimed responsibility for at least one previous terrorist attack, but the legitimacy of the group and the authenticity of such statements could not be verified.

"We in the Islambouli Brigades announce that our holy warriors managed to hijack two Russian planes and were crowned with success though they faced problems at the beginning," said the statement, without elaborating on what kind of "problems" had been encountered.

"Our mujahedeen, with God's grace, succeeded in directing the first blow which will be followed by a series of other operations in a wave to extend support and victory to our Muslim brothers in Chechnya and other Muslim areas which suffer from Russian faithlessness," the statement said.

It is not clear whether the statement claims that Chechens themselves staged attacks on the planes. The Federal Security Service has said it cannot immediately comment on the Web site statement.

Friday's claim did not refer to al Qaeda, but a group called "the Islambouli Brigades of al Qaeda" claimed responsibility for last month's attempt to assassinate Pakistan's prime minister-designate.

Chechen rebels and their supporters are blamed for a series of suicide bombings and other attacks in Chechnya and the rest of Russia over the past several years, including last year's suicide bombings of an outdoor rock concert in Moscow and another outside a hotel near Red Square.

Russian officials have repeatedly contended that the rebels who have been fighting Russian forces in Chechnya for nearly five years receive help from foreign terrorist organizations, including al Qaeda.

While Russian aviation officials Thursday stressed that all possibilities were being investigated for the cause of the nearly simultaneous crashes, presidential envoy Vladimir Yakovlev told Russia's ITAR-Tass news agency that the main theory "all the same remains terrorism."

Transport Minister Igor Levitin confirmed Sibir airlines' report that its crew activated an emergency signal shortly before the plane disappeared from radar. Visiting the crash site, however, he said that details were slim because "no verbal confirmation from the crew was received" saying what the problem was.

Officials previously said there was no indication of trouble from the other plane, the Volga-Aviaexpress airliner, although people on the ground near that crash site reported hearing a series of explosions.

Russian media has raised questions about a possible link between the crashes and an explosion a few hours earlier at a bus stop on a road leading to Domodedovo airport, where the two doomed planes took off. Without citing evidence, the reports suggested the blast, which wounded four people, might have been an effort to distract attention.

Suspicions of terrorism were underscored by warnings from officials that separatists might plan attacks before an election this Sunday in Chechnya to replace the war-torn region's assassinated pro-Kremlin president. The rebels have staged attacks in Moscow and other cities, hijacked planes outside Russia and allegedly staged suicide bombings.

Yakovlev said the planes' flight recorders provide no clues to the disaster. He said both boxes shut off abruptly without any indication of trouble, a sign U.S. aviation experts said was strong evidence of explosions.

Bill Waldock, aviation safety professor at Embry-Riddle Aeronautical University in Arizona, said a sudden stoppage of a plane's two recorders indicates that its electrical system was cut. "An explosion could interrupt electrical power," he said, adding that it was extremely unlikely that another problem would cause four boxes in two planes to quit abruptly.

Peter Goelz, a former managing director of the National Transportation Safety Board, also said the abrupt shutoffs mostly likely point to explosions. But he also raises the possibility that the recorders could have malfunctioned.