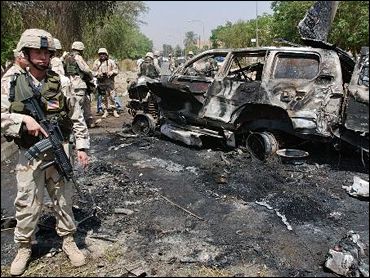 The head of the Iraqi Governing Council was killed in a suicide car bombing near a U.S. checkpoint in central Baghdad on Monday, dealing a blow to U.S. efforts to stabilize Iraq ahead of a handover of sovereignty on June 30.

Six Iraqis and two U.S. soldiers were injured in the bombing near the coalition headquarters, which is called the Green Zone. Three cars waiting in line at the headquarters were destroyed.

Abdel-Zahraa Othman, also known as Izzadine Saleem, was among four Iraqis killed in the blast, according to Redha Jawad Taki, a member of the Supreme Council of the Islamic Revolution in Iraq, a Shiite Muslim organization.

Two other well-known council members, Adnan Pachachi and Ahmad Chalabi, reportedly escaped the blast because their cars had made it inside the compound — safely behind the concrete blast barriers, reports CBS News Correspondent Jim Acosta.

Othman was the second member of the U.S.-appointed council to be assassinated. Aquila al-Hashimi was killed in September.