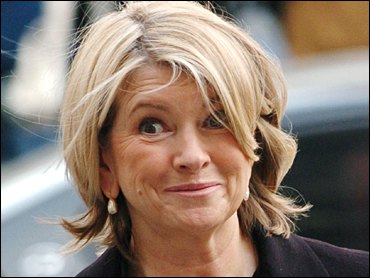 
During her stock conspiracy trial here in Manhattan we learned, or perhaps we were reminded, that Martha Stewart doesn't like to wait. On the telephone. In person. For any reason. But a federal jury is keeping her waiting, waiting for one of the single most dramatic moments of her life. It's not as if the panel isn't trying, however.

I don't know if you would call it ironic but it certainly is noticeable that Stewart's jury seems to be acting as frenetically as she does on television when she makes a raspberry scone out of birch bark in less than one hour. The jurors were barely out the door to begin their deliberations Wednesday when they asked the judge if they could have lunch one more time with the alternate jurors just prior to their departure from the scene. After lunch, the ketchup hadn't dried from their shirt fronts before they sent another note, asking for important testimony from Douglas Faneuil, the government's star witness.

On Thursday, the notes were coming faster than the ability of the judge and the lawyers to respond to them. A pre-lunch note about testimony was still being discussed by the parties in mid-afternoon when the jury asked to see the transcripts of some e-mails made and sent on and about Dec. 27, 2001, the day that Stewart sold her ImClone stock and started herself down this path. On Wednesday, they asked for information that isn't in evidence — an FBI form that was never admitted by the judge — and when they were told they couldn't get the form they asked on Thursday for evidence that would effectively substitute for it.

Then, late in the day on Thursday, jurors passed a note asking a legal question that goes to the perjury charge against Peter Bacanovic, Stewart's co-defendant. The panel wanted to know whether a witness' testimony in court could be considered separate from a business record created and maintained by that same witness. When the judge and lawyers decided they didn't quite understand the question, the jury immediately clarified it: could they consider the testimony of Anne Armstrong, Stewart's assistant, separately from the telephone log she created and maintained? This is important because the federal perjury statute requires two independent corroborating pieces of evidence for a conviction. The judge gave the lawyers half an hour to research the question.

The jury seems so "A Type" that if you weren't actually laying eyes on Martha in court, you might swear she was the jury foreperson. You can almost hear the panel's collective finger-snapping for the information. Even U.S. District Judge Miriam Goldman Cedarbaum noted how direct the panel was in asking for the information. "It's clear what they are asking for," she said during an afternoon session. Maybe the prosecution and defense teams need to hire a few more assistants, or the judge needs to lean on a magistrate or two, to make things move more quickly. Or maybe the judge ought to tell jurors that the system can only handle one question at a time.

The problem is, there is no way to tell what this means for the fate of Stewart and Bacanovic. Juries are known for their results, not for the process by which they achieve them. It's reasonable to think, for example, that since jurors are tackling Count Six, the perjury count against Bacanovic, they already have decided what they want to do about Stewart. In this scenario, we may see a verdict quite soon since there are only eight counts in the whole indictment. On the other hand, their last question of the day simply could mean that they are proceeding as they started, in chronological order, and haven't even yet taken a vote on a single count. The judge doesn't know. The lawyer doesn't know. The bailiff doesn't know. I certainly don't know.

What I do know, after a day and a half of deliberations, is that Stewart, at least, has truly gotten a jury of her peers. Not because anyone the panel has anywhere near the amount of money or fame that she has achieved. But because it seems that at least a few folks on the jury like to tackle tough projects with the same zeal and ardor that she does. Would Martha Stewart want to be judged by a panel of 12 Martha Stewarts? You tell me.