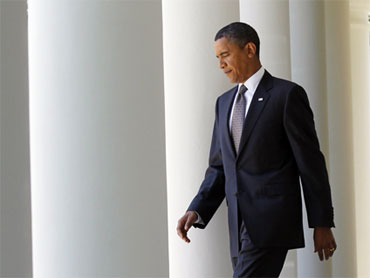 In his first post-midterm election interview, scheduled to air on "60 Minutes" this Sunday, President Obama admitted to Steve Kroft that he has not been successful at selling legislation aimed at improving the economy.

"We stopped paying attention to the fact that leadership isn't just legislation - that it's a matter of persuading people, and giving them confidence and bringing them together, and setting a tone," Mr. Obama said.

"I take personal responsibility for that. And it's something that I've got to examine carefully … as I go forward," he said.

Appearing on CBS' "The Early Show" this morning, veteran Washington Post reporter Bob Woodward, author of the book "Obama's Wars" (Simon & Schuster), said that the president has been "humbled, and maybe humiliated to a certain extent. So he has to grovel a little bit, which is what he's doing.

"He talks about persuasion," Woodward told anchor Harry Smith, "and, of course, what voters, what people want [is], they want problems fixed. And he hasn't yet fixed some of the main issues, particularly the economy.

"But what all of this shows, I think, Harry, is there's this concentration of power and expectation in the presidency to an extent that we've never seen before. Obama's out every day campaigning or doing something, so people want him to handle all these problems, in a way, instantly - and, of course, he can't and has not done that."

When asked what Mr. Obama needs to figure out going forward with a Republican-led House of Representatives (which has already declared war on some of the president's legislative achievements, such as health care reform), Woodward said, "I think probably three things. First of all, he's got this political problem of dealing with the Republicans. How is he going to approach that? What's going to be the strategy? How willing is he going to be to compromise?

"Second, I think the economy - unemployment, big, big deal. These problems can't be solved in a year or two years. He's got to develop, really, a long-term plan - five, ten years. He's got to get the Republicans to sign on to some of that.

"And then the third area is foreign policy. The war in Afghanistan, the threat of terror is very real."

"As you've been able to observe so closely all these different administrations, this one included, who does [the president] call?" asked Smith. "Who does he go for a walk in the woods with, so to speak, in order to formulate who he is and what he's about for the next two years?"

"I think one of the things you find and I find in my reporting on this is the circle's too narrow; he's got to broaden it," Woodward replied. "He's got to get opinions outside that narrow group in the White House. I suspect he's going to be not just calling the Republican leaders for dinner, he's going to be calling lots of old hands in the Democratic Party, in the world. I suspect he'll have Bill Clinton in. I suspect he might even have George W. Bush in.

"He has to think it through in a much larger context. The White House game plan has been too narrow. People don't like that. He's got to be much more inclusive."

To view a preview of President Obama's interview with Steve Kroft click on the player below. You can watch the entire exclusive interview on "60 Minutes" Sunday, Nov. 7 at 7 p.m. ET.