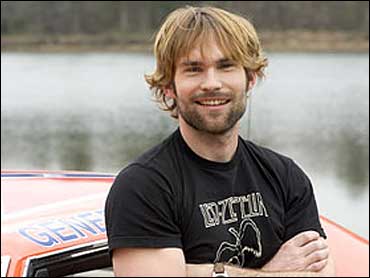 For six seasons, the hit show "The Dukes Of Hazzard" followed cousins and best friends Luke and Bo Duke on their misadventures through Hazzard County.

Now the "good ole boys" make their way to the big screen, bringing cousin Daisy, Uncle Jesse, "The General Lee," and archrival Boss Hogg along for the ride.

"I get to drive the car," Scott tells The Early Show national correspondent Tracy Smith as he discusses his character.

There are two things in Hazzard County that you can always count on: super-charged moonshine and Bo behind the wheel of his beloved orange Charger.

For Scott, playing Bo took him back to his childhood days in Minnesota.

"I was about 8 when I watched the show. I watched it every Friday at 8:30," Scott says, "I remember being excited to see what the General Lee was going to do. It was my favorite character other than Daisy Duke. So I was psyched to do this movie and to drive the car."

"The General Lee" is Bo's greatest passion in life, and under no circumstances does he allow anyone else to lay a hand on it, let alone drive it. For Scott, this translated to intense, three-week, two-hour-a-day stunt driving lessons from renowned stunt driver Bobby Orr.

"It takes a lot of practice to get the feel of the car moving and knowing when to steer, counter-steer and let off on the brake," says Scott. "It's a challenge, but a lot of it is just not being afraid to make a mistake and learning from them when you do."

As for working with Jessica Simpson, Scott says, "You can tell she's been performing in front of thousands of people for a long time. She was a natural. She has so much charisma and a great sense of humor that she's fine. She looks amazing in the film."

And for his performance, Scott is getting compliments as well. Vanity Fair called him a "world class doofus."

"I like the 'world class' part," he says, "The doofus thing, I'll take it. If it allows me to get more opportunities, I can be a doofus for anybody, anything for a laugh."

Some Facts About Seann William Scott

Three Could Be Charm Twice For Bloom