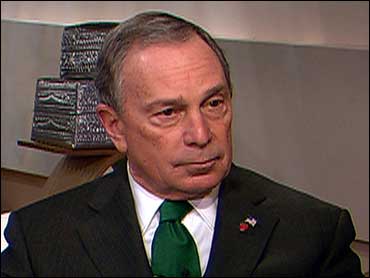 Michael Bloomberg, New York's billionaire mayor who poured $155 million of his own money into his first two campaigns, refused Thursday to agree to a spending limit for his third term bid, dismissing it as a ridiculous idea.

The Democrat-turned-Republican-turned-independent mayor, who has been reluctant to talk about his re-election efforts, said he would finance the operation himself and that his actions were separate from those of his opponents, who rely on public matching and fundraising.

Bloomberg, whose wealth is estimated at $20 billion, is allowed to spend as much as he wants on his third bid for office because he does not raise money and opts out of public financing.

In 2005, when Bloomberg ran for re-election and crushed his Democratic opponent, he spent $85 million while his opponent spent about $10 million.

Eduardo Castell, campaign manager for one of this year's Democratic challengers, William Thompson Jr., said Bloomberg must be scared of a spending limit.

"Why is the mayor afraid of a fair fight? Maybe he feels he needs to spend an obscene amount of money to hide his record," Castell said.

If Bloomberg spends more than $18 million this year, an amount he had reached by late summer during his last race, it could trigger extra public matching funds under city campaign finance law.

The law provides that, if the self-financed candidate spends three times the spending limit for publicly funded candidates, the limit is lifted and more public matching funds are available.

Under the law, that works out to $7.7 million in matching funds this year, instead of $3.4 million.

A reporter pointed out to Bloomberg on Thursday that by spending freely, taxpayers would have to pay for the extra funds to the other candidates.

Bloomberg said his opponents "don't have to take the money."