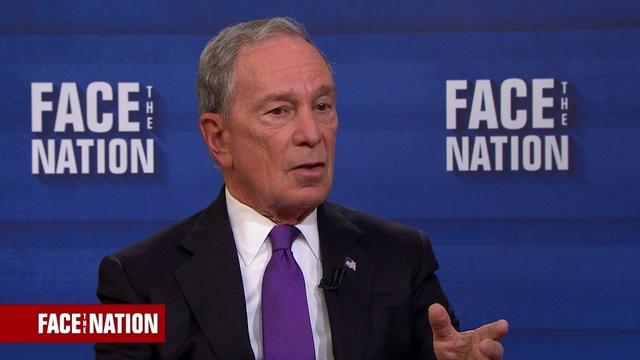 Former New York City Mayor and philanthropist Michael Bloomberg says he has a responsibility to help the environment as the Trump administration has backed down from its role in the Paris climate agreement. He said on "Face the Nation" he will write a check for $4.5 million this year to fund that mission.

"America made a commitment and as an American if the government's not going to do it we all have responsibility. I'm able to do it. So, yes, I'm going to send them a check for the monies that America had promised to the organization as though they got it from the federal government," said Bloomberg.

Last year, the Trump administration formally told the United Nations the U.S. intends to pull out of the Obama-era climate pact. In response, Bloomberg joined members of the U.S. Conference of Mayors opposing the president's withdrawal, vowing to affirm their commitment to meet environmental goals of reducing carbon emissions despite the president's actions. He also announced that his foundation, Bloomberg Philanthropies, would help coordinate a U.S. effort called "America's Pledge" and submit a societal NDC -- nationally determined contribution -- in lieu of a government one. Last year, he pledged to provide the $15 million that he says the U.N. Climate Change Secretariat will lose from Mr. Trump's withdrawal from the pact.

But Bloomberg says he's hopeful Mr. Trump could still change his mind despite being a vocal critic of the accord.

The former mayor said keeping up the country's end of the bargain in preserving the environment for future generations is what Americans want to do.

"We've got companies and states and individuals all agreeing to step in, report to the United Nations what our progress is the way all the other countries are going to do it, commit -- fulfill our commitment to fund part of it. It's not a lot of money. But America made that commitment and most importantly to do the things that will keep temperatures from going up and really potentially changing our life for the worst," he said.