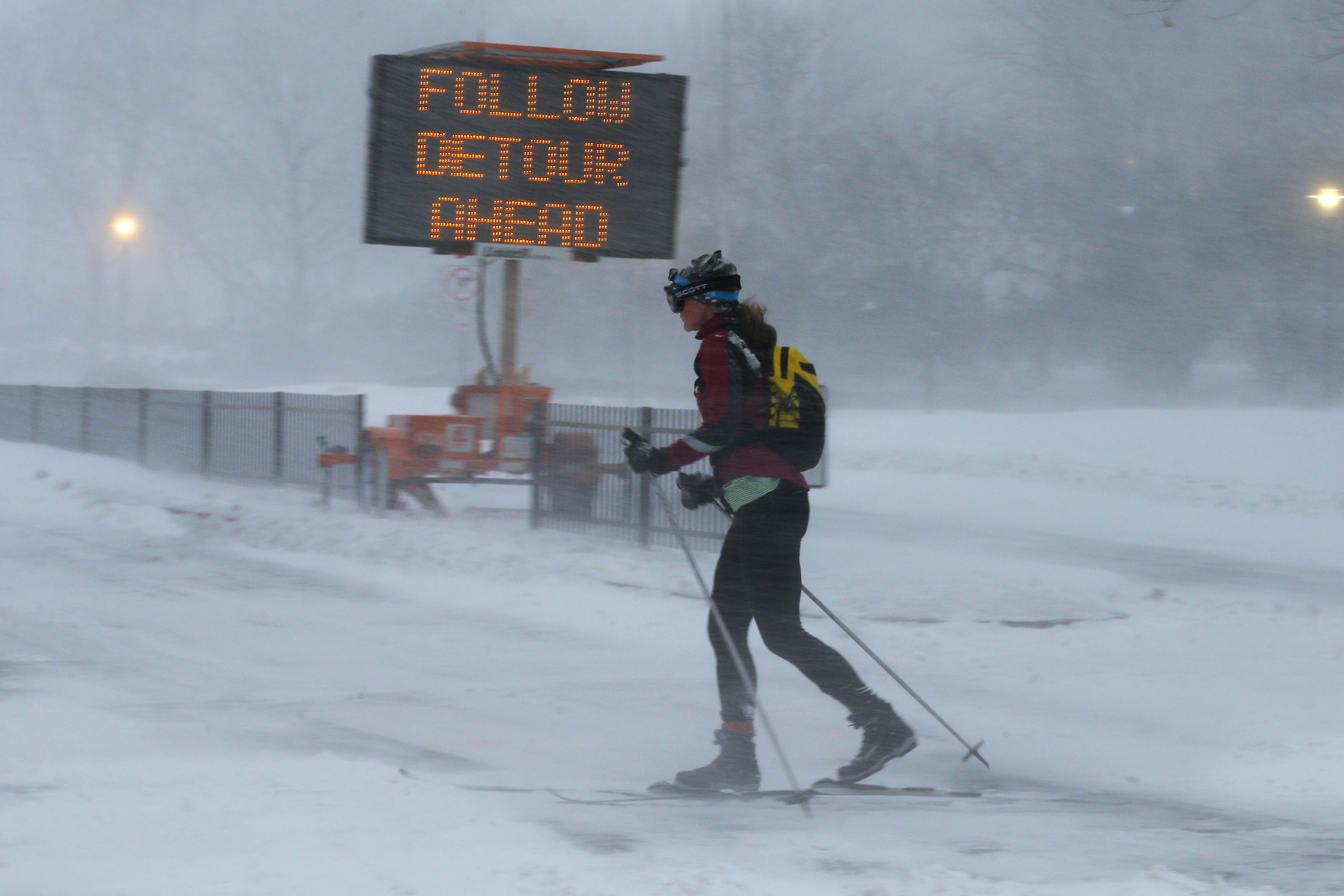 BOSTON - Its winds howling at more than 70 mph, the Blizzard of 2015 slammed Boston and surrounding parts of New England on Tuesday with none of the mercy it unexpectedly showed New York City, piling up more than 2 feet of snow.

The storm punched out a 40-to-50-foot section of a seawall in Marshfield, Massachusetts, badly damaging a vacant home. In Newport, Rhode Island, it toppled a 110-foot replica of a Revolutionary War sailing vessel in dry dock, breaking its mast and puncturing its hull.

The blizzard's force and relentlessness stunned even winter-hardened New Englanders.

"It's a wicked storm," Jeff Russell said as he fought a mounting snowdrift threatening to cover a window at his home in Scarborough, Maine.

The snow in New England began Monday evening and continued most of Tuesday. A blizzard warning for Boston ended Tuesday evening as the snow tapered off, but one remained in effect for the south coast, Cape Cod and nearby islands.

The area also was dealing with bitter cold: The low in Boston on Wednesday is expected to be 10 degrees, with wind chill minus 5, and forecasters said it will not get above freezing for the next week or so.

Hurricane force winds up to 78 miles an hour created dangerous, whiteout conditions in many cities across Massachusetts, CBS News' Anna Werner reported. This time lapse video by Joshua Seiglershowed the overnight buildup in Boston, as snow fell at a rate of 2 to 4 inches per hour.

Thirty miles to the southeast in the coastal town of Scituate, a storm surge flooded the streets, damaging cars and homes. The National Guard had to rescue a 50-year old man after a wave knocked down his door and filled his home with 7 feet of water.

"It's part of living here," said Steve Berlo, who has an oceanfront home in Scituate. "When the water comes, you get out of the way, and when it goes, you see what it left you. Like we always say, five days a year it sucks to live here, but the rest of the year it's good."

The Philadelphia-to-Boston corridor of more than 35 million people had braced for a paralyzing blast Monday evening and into Tuesday after forecasters warned of a storm of potentially historic proportions.

The weather lived up to its billing in New England and on New York's Long Island, which also got clobbered.

But in the New York City area, the snowfall wasn't all that bad, falling short of a foot. By Tuesday morning, buses and subways were starting to run again, and driving bans there and in New Jersey had been lifted.

"We got about half as much as a lot of the projections have been," New York City Mayor Bill DeBlasio said around noon on Tuesday.

After much of the region shut down due to the dire warnings of weather forecasters, at least one National Weather Service meteorologist apologized.

All too aware that big snowstorms can make or break politicians, governors and mayors moved quickly to declare emergencies and order the shutdown of streets, highways, bridges and tunnels to prevent travelers from getting stranded and to enable plows and emergency vehicles to get through.

The glancing blow left forecasters apologizing and politicians defending their near-total shutdown on travel. Some commuters grumbled, but others sounded a better-safe-than-sorry note and even expressed sympathy for the weatherman.

"I think it's like the situation with Ebola: If you over-cover, people are ready and prepared, rather than not giving it the attention it needs," said Brandon Bhajan, a New York security guard.

National Weather Service director Louis Uccellini said his agency should have done a better job of communicating the uncertainty in its forecast. But he also said the storm may in fact prove to be one of the biggest ever in some parts of Massachusetts.

Around New England, snowplows struggled to keep up, and Boston police drove several dozen doctors and nurses to work at hospitals. Snow blanketed Boston Common, where the Redcoats drilled during the Revolution, and drifts piled up against Faneuil Hall, where Samuel Adams and the Sons of Liberty stoked the fires of rebellion.

Providence, Rhode Island, had well over a foot of snow. Sixteen inches had piled up in Portland, Maine, and 23 inches in Waterford, Connecticut. Montauk, on the eastern end of Long Island, got about 2 feet.

"It feels like a hurricane with snow," said Maureen Keller, who works at an oceanfront resort in Montauk.

At least 30,000 homes and businesses were without power in the Boston-Cape Cod area, including the entire island of Nantucket.

A 78 mph wind gust was reported on Nantucket, and a 72 mph one on Martha's Vineyard.

"It felt like sand hitting you in the face," Bob Paglia said after walking his dog in Whitman, a small town about 20 miles south of Boston.

Two deaths, both on Long Island, were tied to the storm by police: a 17-year-old who crashed into a light pole while snow-tubing down a street and an 83-year-old man with dementia who was found dead in his backyard.

As the storm pushed into the Northeast on Monday, the region came to a near standstill, alarmed by forecasters' dire predictions. More than 8,100 flights were canceled, and schools, businesses, government offices and transit systems shut down. But the storm tracked farther east than forecasters expected.

"This is nothing," said Susanne Payot, a New York cabaret singer whose rehearsal Tuesday was canceled. "I don't understand why the whole city shut down because of this."

National Weather Service forecaster Gary Szatkowski, of Mount Holly, New Jersey, tweeted an apology: "You made a lot of tough decisions expecting us to get it right, and we didn't. Once again, I'm sorry."

New Jersey Gov. Chris Christie defended his statewide ban on travel as "absolutely the right decision to make," given the dire forecast. De Blasio said his city will look at whether storm procedures could be improved but added: "You can't be a Monday morning quarterback on something like the weather."

Officials in cold-weather cities know the political costs of seeming unprepared or unresponsive in snowstorms, and the blizzard poses a test for Massachusetts Gov. Charlie Baker, who took office three weeks ago, and Boston Mayor Martin Walsh, who just finished his first year in office.

With the storm drawing near, the governor banned all non-essential travel, and the mayor ordered city schools closed for two days.

"So far, so good," said Tufts University political science professor Jeffrey Berry. "What's important for a governor or a mayor is to appear to be in charge and to have a plan to finish up the job and to get the city and the state back to work."