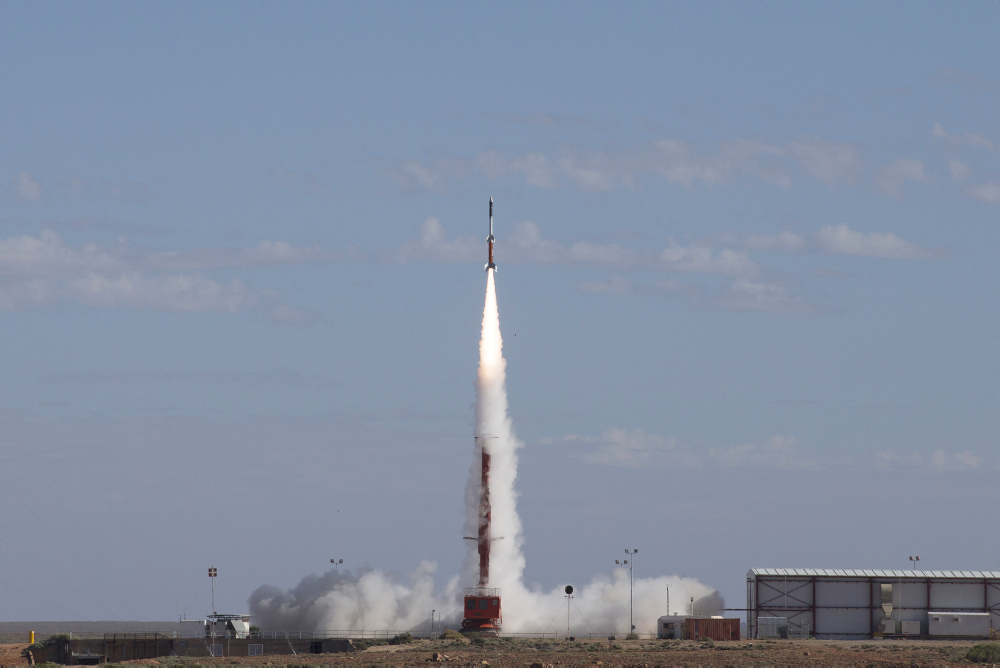 A hypersonic jet engine that could be used to fly people from Sydney to London in just 2 hours is on track to make its first flight in 2018, according to the Australian scientists and engineers working on the project.

Last week, the researchers conducted an experimental rocket launch at the Woomera Test Range, located about 310 miles northwest of Adelaide, in the South Australian outback.

A test vehicle, designed to gather data about hypersonic flight in the upper atmosphere, launched from Woomera to an altitude of 173 miles and reached its target speed of Mach 7.5 -- seven and a half times the speed of sound, or about 5,700 mph. [See Photos of Australia's Hypersonic 'HIFiRE' Project]

Supersonic combustion ramjet engines, known as scramjets, can burn hydrogen fuel and oxygen from the atmosphere at hypersonic speeds -- above Mach 5, or five times the speed of sound, far beyond the speeds possible with ordinary jet engines. In 2011, an experimental scramjet developed by the U.S. military's Defense Advanced Research Projects Agency (DARPA) reached Mach 20 -- about 13,000 mph, or 20,900 km/h -- before it lost control.

Someday, commercial aircraft with hypersonic scramjets might zip tourists around the world in just a few hours, or help launch satellites into orbit. But so far, the main push for hypersonic technology has come from militaries that see strategic value in hypersonic weapons and spy planes.

The HIFiRE 5b flight gathered data about the aerodynamic drag (the resistant force from air friction around a moving object) and the heating from air friction experienced by an aircraft flying at hypersonic speeds about 19 miles above the Earth's surface, Smart told Live Science.

"We do a significant amount of ground testing, but we can't get information about those two things," he said. "So, we dedicated a whole flight to getting that information."

After separating from the launch rocket, the conical test vehicle was "basically coming straight down at Mach 7 and a half," Smart said.

"It goes through the interesting part of the atmosphere for us for about 5 to 10 seconds, when we get some really great data," he added. "But then, the atmosphere gets so thick that the fins burn off, and it starts to tumble."

Scramjets do not work below hypersonic speeds, so experimental scramjets rely on rockets to boost them faster than Mach 5.

The HIFiRE engine was developed in ground and wind-tunnel tests over the course of five years, and the experimental launches at the Woomera Test Range are milestones leading up to the first 10-second horizontal test flight in 2018, Smart said.

The engine was made entirely from lightweight carbon-composite materials that could survive its operating temperature of about 2,900 degrees Fahrenheit -- hot enough to melt metal jet engines.

Smart said that although hypersonic passenger jets are still many decades away, scramjets could be used for civilian applications within the next 10 or 20 years, to launch small satellites.

Because scramjets use oxygen from the atmosphere to burn propellant, instead of the liquid oxygen used in large rockets, these hypersonic vehicles could carry bigger payloads. Scramjet launchers could also be flown back to the ground to be used multiple times, the researchers said.

"The scramjet technology we've developed could be a reusable stage of a satellite launch system, and at the University of Queensland, that's the angle we're spending a lot of effort to develop ... as a commercial application where there's a real opportunity," Smart said.