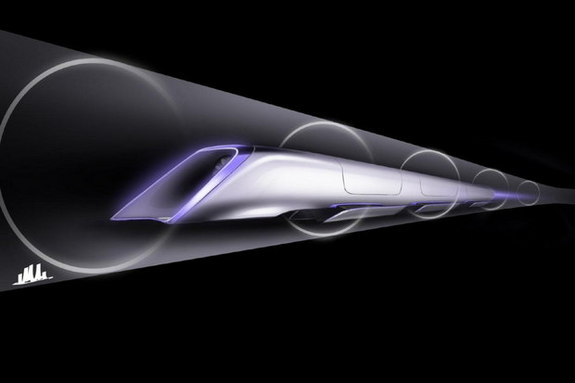 The "Hyperloop," a hypothetical high-speed transportation system that could shuttle people between Los Angeles and San Francisco in only 30 minutes, just sped a bit closer to reality.

First proposed in 2013 by billionaire entrepreneur Elon Musk, CEO of Tesla Motors and SpaceX, the Hyperloop would transport passengers in floating pods inside low-pressure tubes at speeds of more than 750 mph (1,200 km/h).

Now, the company Hyperloop Transportation Technologies Inc. (which is not affiliated with Musk or Tesla) has inked a deal with landowners in central California to build the world's first Hyperloop test track, according to market research firm Navigant Research. The 5-mile (8 km) test track will be built along California's Interstate 5. [Photos: Elon Musk's Superfast 'Hyperloop' Transit System of the Future]

Separately, Musk has said he plans to build his own 5-mile test track, likely in Texas, for companies and students to test out potential Hyperloop designs.

How Hyperloop will work

Musk laid out his plans for the Hyperloop in a paper published on the SpaceX website. He has described the superspeedy mode of transport as a "cross between a Concorde, a rail gun and an air-hockey table."

The idea is, passenger pods will travel inside tubes under a partial vacuum, and will be accelerated to blistering speeds using magnets. A set of fans attached to the pods will allow the train to rest on a cushion of air. The system would be powered by solar panels along the length of the tube.

The world's fastest magnetically levitated (maglev) train travels at about 310 mph (500 km/h). Maglev trains work by using magnets to produce both lift and propulsion. By contrast, the hyperloop would only use magnets for propulsion, relying on compressed air for lift. Maglev trains are in operation in Shanghai and Tokyo, and South Korea plans to open one in June.

Hyperloop pods could theoretically travel very fast, because they wouldn't have to overcome friction between the wheels and track that a typical train uses, or the air resistance that conventional vehicles experience at high speeds.

"You can go a couple of hundred miles an hour with a wheel, as the French and Germans and Japanese have proven," said Marc Thompson, an engineering consultant at Thompson Consulting Inc. in Boston, who has worked on maglev systems. But, "as you go faster, the drag force on the train becomes a very high energy cost."

At that speed, the air drag is still possible to overcome, but beyond that, the power needed to exceed the drag increases as the speed cubed, said James Powell, a retired physicist and co-inventor of the superconducting maglev concept.

The Hyperloop has the potential to be a faster, cheaper and more energy-efficient form of travel than planes, trains or buses, its proponents say. However, it's not yet known if the technology is feasible, or safe. [Video: What on Earth Is a Hyperloop?]

For one thing, the tubes have to be very straight, leaving very little room for error. "The guideway [track] has to be built to very fine tolerances, because if the position of the wall deviates from straightness by a few thousandths of an inch, you could crash," Powell told Live Science.

The tubes also have to maintain low-pressure air. "The problem with traveling in an evacuated tube is, if you lose the vacuum in the tube, everybody in the tube will crash," Powell said. In addition, the vehicle's compressor -- which produces the air cushion on which the pods rest -- can't fail, or the pods will crash into the walls, he added.

"The whole system is vulnerable to a single-point failure," Powell said. For example, somebody could blow a hole in the tube's side, or an earthquake (no rarity in California) could shift the tube by a fraction of an inch, both of which would cause the vehicles to crash. In superconducting maglev, by contrast, the magnets are very stable and operate reliably, Powell said. "It doesn't require continuous control to keep it suspended."

What will it cost?

The 5-mile test track is estimated to cost about $100 million, which Hyperloop Transportation Technologies hopes to pay for with its initial public offering (IPO) later this year, according to Navigant's blog. Assuming building costs remain the same, a 400-mile (644 km) track between Los Angeles and San Francisco would cost about $8 billion (not including development costs), experts estimate. This price tag is still far less than that for California's planned high-speed rail project, which could cost $67.6 billion, according to the California High-Speed Rail Authority.

But Powell questions whether the Hyperloopwould really be as cheap as promised. "The main cost of these high-speed systems is in the cost of the guideway," he said. And because the track must be built so precisely, it's going to be more expensive, he added.

Even if the Hyperloop is successful, Powell doesn't think it will fix the United States' transportation problems -- namely, congested highways and airways. "A few isolated high-speed rail corridors in the United States really won't address our big problems," he said.