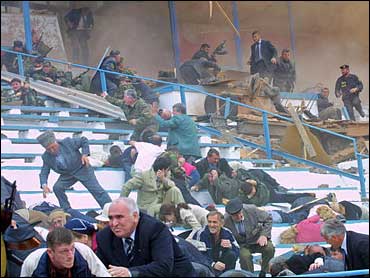 The Kremlin-backed president of Russia's warring Chechnya region was killed Sunday when an explosion tore through a stadium in the Chechen capital where he was attending Victory Day observances marking the defeat of the Nazis in World War II, officials said.

Some 30 people died in the blast that killed Akhmad Kadyrov, the ITAR-Tass news agency reported. A top Russian military commander, Col.-Gen. Valery Baranov, was also at the stadium and there were conflicting reports on whether he had died or was seriously wounded.

Kadyrov's death was reported by an official of the Chechen Interior Ministry. It was later confirmed by the regional military command, ITAR-Tass said.

The blast, believed to have been a land mine planted under the stadium's VIP section, underlined the security problems even as the Kremlin says normalcy is being restored after nearly five years of fighting against separatist rebels.

Nearly every day Russian soldiers are reported killed in small attacks by rebels and by rebel-set explosions.

Grozny, the war-ruined Chechen capital, has a huge presence of Russian forces, but they have not been able to purge insurgents from the city.

There was no immediate claim of responsibility, but suspicion inevitably fell on the rebels.

The stadium's VIP section collapsed into a jagged hole of torn wooden planks, sending up a plume of brown smoke. Panicked people dressed in their Sunday best clambered over the bleachers and shots split the air amid the chaos.

Footage on Russia's NTV television showed men in uniform dragging a man resembling Kadyrov covered in blood away from the broken seating area.

Another emergency ministry spokesman, Sergei Kozhemyaka, said a second land mine was found near the VIP seats. Russia's Echo of Moscow radio reported that numerous people were detained.

Russia marks the Allied victory over the Nazis every May 9 with military parades and fireworks around the country.

Security was especially tight across Russia. In 2002, a bomb exploded during a Victory Day military parade in the Caspian Sea port of Kaspiisk, killing 43 people, including 12 children.

Kadyrov was a rebel commander during the separatists' 1994-96 war that ended with Russian forces withdrawing. However, he became disenchanted during the period of Chechnya's de-facto independence, complaining of the growing influence of the Wahhabi sect of Islam in the republic.

He broke with Aslan Maskhadov, who had been elected Chechen president in 1997, and in 2000 the Kremlin appointed him the republic's top civilian administrator. He was elected president last October in a vote widely criticized as fraudulent.

The election was portrayed by the Kremlin as a substantial step forward for restoring order to Chechnya.

Refugees who have returned to Chechnya say that Kadyrov's administration has withheld promised compensation for six months or more and many Chechens complain of seizures of civilians under his administration.

Kadyrov's son Ramzan runs a security force that is widely blamed for civilian disappearances. Putin met Sunday afternoon with the younger Kadyrov, the Kremlin press service said, although there was no further immediate information.