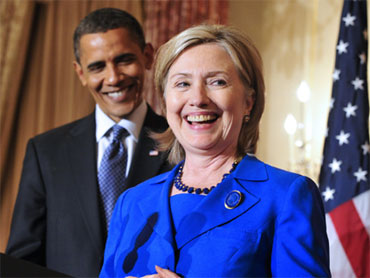 Tony Blair weathered a backlash over the Iraq war to win a historic third term as prime minister Friday, but with a reduced majority that could weaken his mandate and prompt him to step aside earlier than he plans.

Voter opposition to the war and critics who claimed Blair had followed president Bush into battle based on shaky intelligence cost him credibility and votes, reports CBS News Correspondent Richard Roth.

"It's a tremendous honor and a privilege to be elected for a third term. And I'm acutely conscious of that honor and that privilege," Blair said, speaking outside his Downing Street office.

"I know that Iraq has been a deeply divisive issue in this country. ... But I also know and believe that after this election, people want to move on, they want to focus on the future — in Iraq and here," he said.

With the count still incomplete, but the Labour Party's majority assured, Blair went to Buckingham Palace on Friday morning to be confirmed as prime minister for the third time.

Traditionally, Queen Elizabeth II confirms the winner of the national election as prime minister, providing she believes that person commands a sufficient majority in the House of Commons to be able to carry on Her Majesty's Government.

Labour needed at least 324 seats to form a majority in the 646-seat House of Commons. With 620 seats reporting, Labour had 353 seats; the main opposition Conservatives 195; Liberal Democrats 60; and independents and smaller parties 12. Labour's majority of 161 in the last Parliament had been slashed by almost 100 seats.

The loss of so many seats by Labour makes it unlikely that Blair will complete this five-year term as prime minister before being replaced by his party, reports D'Agata. His Cabinet colleague and rival, powerful Treasury chief Gordon Brown, is widely regarded as his likely successor.

Nevertheless, it was a historic victory for Blair and his party — the first time a Labour government has won three straight elections.

"I think we can be really proud of what we've achieved," said Blair, who was greeted with cheers and applause by party staff and supporters when he arrived back in central London from Sedgefield. "We've got a mandate to govern this country again," added Blair, who celebrates his 52nd birthday Friday.

The British Broadcasting Corp. projected Labour would win 66 more seats than all the other parties combined. Sky News put the Labour majority at 64 seats. Results in 610 constituencies showed a turnout of more than 61 percent of the electorate, up 2 percent from 2001's record low.

Official results for the remaining seats were expected to trickle in through the weekend.

The margin of a Labour victory also could have consequences for Britain's "special relationship" with the United States. The battering Blair took over Iraq during the campaign suggested that any future British leader will probably be wary of backing Washington militarily in the face of hostile domestic opinion.

A politically weakened Blair, who has said he will not seek another term, also could find it difficult to persuade British voters to approve a proposed constitution for the European Union, which requires ratification by all member states.

Conservative leader Michael Howard, whose party has floundered in opposition since it was decisively ousted from government in 1997, was bolstered by an improved seat tally for the Conservatives.

Despite backing the war, Howard accused Blair of misrepresenting flimsy British intelligence on Iraqi weapons of mass destruction and lying about the legal case for war. He urged voters to "wipe the smirk" off Blair's face. Howard, however, congratulated Blair on his victory on Friday.

"We have sent a message to Mr. Blair, and in the next Parliament we will be able to form a stronger opposition," he said.

Blair was once regarded as Labour's most prized electoral asset. He banked on his trustworthiness and described himself as a "pretty straight guy" soon after winning power in 1997.

Labour's diminished majority is a stark indication of how far his popularity has crashed since the landslide victories of 1997 and 2001. Blair could now face difficulties controlling a disaffected rump of Labour lawmakers deeply disillusioned with his leadership, especially over Iraq, and the centrist flavor he has given the traditionally socialist party.

Blair's government only narrowly defeated revolts in the last parliament, including the crucial vote to go to war in Iraq, and legislation introducing tuition fees for university students, more private funding for state-run hospitals and tough anti-terrorism laws.

"If his majority falls below 60 then you are in an area where an organized minority would have a strong bargaining power," said Geoff Andrews, political analyst at the Open University.

Even with a reduced majority, it is a historic victory for Labour, which has never before won three straight terms. The party's strong economic record — Britain's growth is high and unemployment low compared with much of the rest of the European Union — appears to have outweighed the resentment over Iraq. Labour is also credited with improving public services such as health and education through investment.

"I promise that we will listen and we will learn so that we can serve our country and our communities even better in the years to come," said Brown.

Commentators suggested power would begin to seep away from Blair to Brown, whose strong stewardship of the British economy has made him a more popular and trustworthy figure.

"On these results I would have thought, not Gordon Brown himself but the Brown supporters will be wondering how quickly they can move Tony Blair out of Downing Street," said former Conservative minister Michael Portillo.

"The key factor in the campaign was that this time Tony Blair was not an electoral asset. He was becoming a liability."