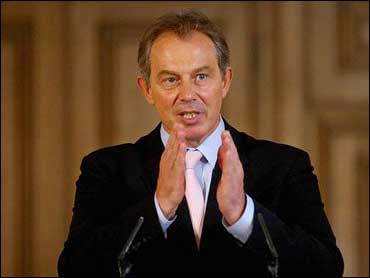 Prime Minister Tony Blair said Tuesday that Britain would not "give one inch" to terrorists on his government's policy on Iraq and the Middle East, while police said two suspects in last week's failed bombings were legal immigrants who moved to Britain from Somalia and Eritrea.

Blair made his comments after holding a rare meeting with opposition party leaders to discuss new anti-terror legislation aimed at preventing a repeat of the July 7 suicide bombings that killed 52 people and four suspected suicide bombers.

The opposition, however, had reservations about extending custody for such suspects, saying it could erode civil liberties.

At his monthly news conference, Blair said the response by Londoners to the deadly July 7 bombings and the failed July 21 attacks against identical targets had been "magnificent."

"London is being tested but standing firm," he said.

Asked whether the British-backed and U.S.-led invasion of Iraq had fueled terrorist attacks around the world and in London, Blair said "there was no excuse or justification" for their actions of the bombers.

"Whatever excuse or justification these people use, I do not believe we should give one inch to them… Not one inch should we give to these people," Blair said.

"Sept. 11 for me was a wake-up call," he said. "Do you know what I think the problem is? A lot of the world woke up for a short time and then turned over and went back to sleep again."

But a new poll showed that a majority of Britain's Muslims surveyed believe Blair's decision to join the U.S.-led war in Iraq was one of the reasons behind the bombings.

The ICM poll for The Guardian newspaper said 58 percent of British Muslims responding agreed "a lot" with the suggestion that the decision to join the invasion of Iraq was a reason for the attacks, while 21 percent agreed with the statement that the war was "a little" bit responsible, and 10 percent said it had nothing to do with the bombings.

The poll also said about two-thirds of Muslims surveyed after the bombings said they had thought about moving away from Britain.

The ICM poll interviewed a random sample of 500 Muslims by telephone July 15-19. The margin of error was plus or minus 4 percentage points.

As police searched for the four men wanted for the July 21 attempted bombings, the Home Office said Tuesday that two of the suspects were immigrants who moved to Britain as children, both coming as the dependents of refugees.

Suspect Yasin Hassan Omar, 24, is a legal British resident who arrived in Britain in 1992 from Somalia when he was 11, the Home Office said. He is suspected of trying to blow up a subway train near Warren Street station.

Muktar Said Ibrahim, 27, suspected of trying to bomb a bus last Thursday, moved to Britain from Eritrea as a child. Said, also known as Muktar Mohammed Said, gained residency in 1992 at age 14 and became a British citizen in September 2004, the Home Office said.

Said's family said they moved to Britain in 1990. They said they were shocked to learn of Said's alleged involvement in the attacks.

"The family wish to express their shock regarding recent events and in no way condone any acts of terrorism," they said in a statement.

"We have seized a car ... in connection with the investigation into the incidents of July 21 but we're not prepared to discuss it further," she said on customary condition of anonymity.

Authorities believe the bomb factory was in a public housing project in North London, and as CBS News Correspondent Richard Roth reports, there's a new worry: that the bombers may have come back for more explosives after their attacks last Thursday failed.

Roth reports security camera photos jogged the memory of a neighbor who thinks she saw one of the bombers outside his ninth floor apartment the next day, with two companions.

"As soon as they seen me they was suspicious and looked very worried," the neighbor said. "They panicked (and) jumped back into the flat and shut the door."

Police were questioning five suspects arrested in connection with the July 21 attacks.

The bombs, which failed to fully detonate, were stored in clear plastic food containers and put into dark-colored bags or backpacks. Those four bombs were similar to another found abandoned in a park Saturday, raising fears that a fifth bomber was on the loose, said Peter Clarke, head of the Metropolitan Police anti-terrorist squad.

Police Commissioner Ian Blair has indicated he believed al Qaeda-linked terrorists were involved in both attacks. Asked if they were connected, he said: "We have no proof that they are linked, but clearly there is a pattern here."

As the investigation rolled on, police faced growing criticism over the killing of an unarmed Brazilian, mistaken for a potential bomber.

The family of Jean Charles de Menezes, 27, shot dead Friday inside a subway carriage in front of horrified passengers, said they were considering legal action against the police.

Roth reports police now say de Menezes was shot at least eight times: seven times in the head and once in the shoulder. British officials have been expressing regret about the shooting of an innocent man, but they're still defending the police "shoot to kill" policy as necessary to disable suicide bombers.

After meeting with the prime minister, opposition leaders said they did not believe they would have to reconvene Parliament in summer instead of October as planned, to discuss new terrorism legislation.

The proposals under discussion would outlaw "indirect incitement" of terrorism, including praising those who carry out attacks, to counter extremist Islamist clerics accused of radicalizing disaffected Muslim youth in Britain.

The law also would make it illegal to receive training in terrorist techniques in Britain or abroad, or to plan an attack and activities such as acquiring bomb-making instructions on the Internet.

"There's a great desire at a time when the country faces such great danger to work together. We are all in this together and we all believe it is very important to show that the country is united in its response to the danger we face," Conservative leader Michael Howard said.

Howard said, however, there were "very considerable difficulties" over the proposal to hold terror suspects for up to three months.

"That is a long time to hold someone without charge, and possibly just release them after that," Howard said.

"We have to make sure that we go about this in a measured way and that we don't surrender basic civil liberties," Kennedy said.