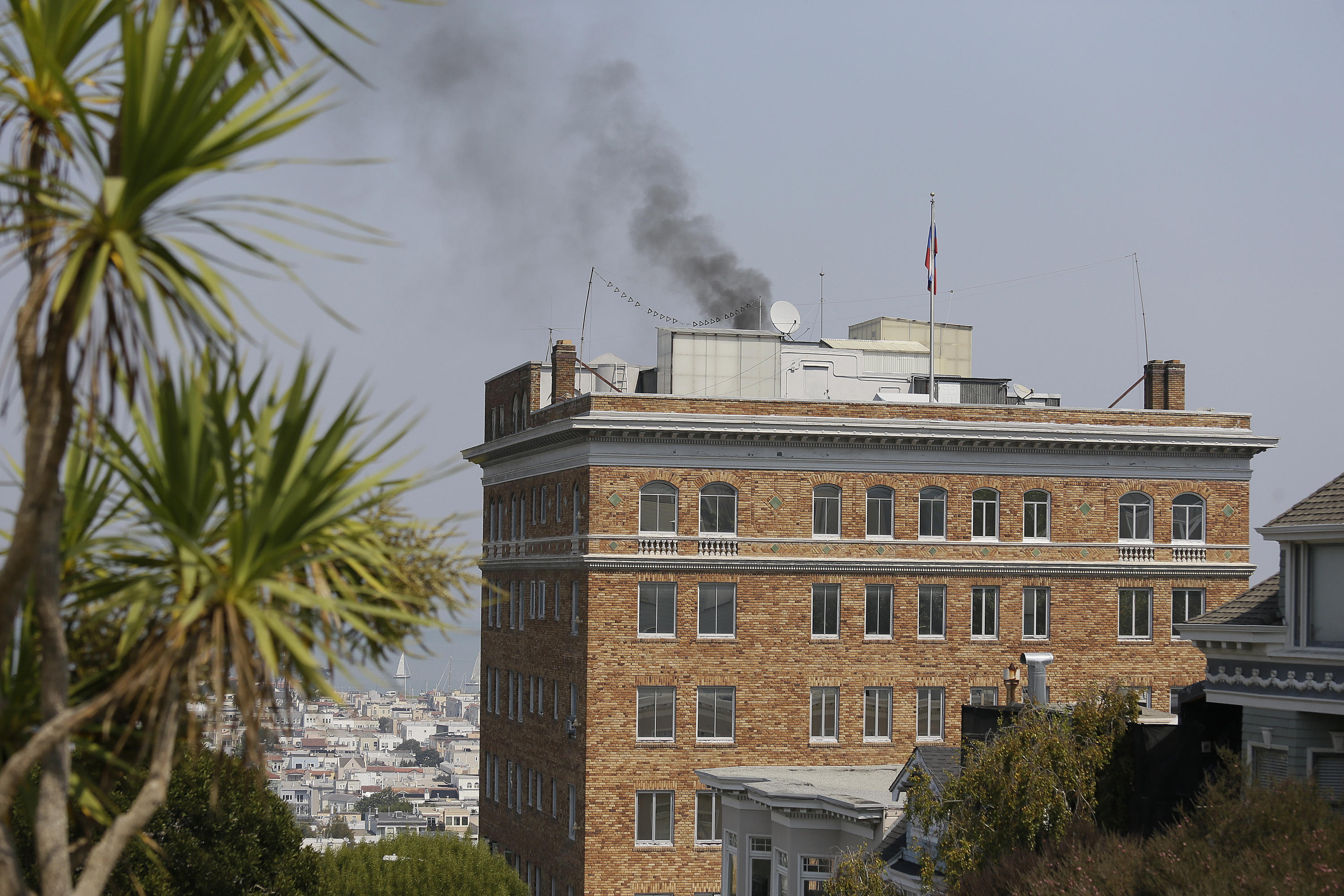 SAN FRANCISCO -- Acrid, black smoke was seen pouring from a chimney at the Russian consulate in San Francisco and workers began hauling boxes out of the stately building in a historic area of the city Friday, a day after the Trump administration ordered its closure amid escalating tensions between the United States and Russia.

The workers were hurrying to shut Russia's oldest consulate in the U.S. ahead of a Saturday deadline.

The order to leave the consulate and an official diplomatic residence in San Francisco -- home to a longstanding community of Russian emigres and technology workers -- escalated an already tense diplomatic standoff between Washington and Moscow, even for those who have long monitored activities inside the closely monitored building.

"There is finally the realization by the administration that Russians have been involved in intelligence operations at this consulate, which they have been doing for decades," said Rick Smith, a veteran FBI special agent who previously headed the bureau's Russian counterintelligence squad in San Francisco. "It's almost 50 years of history and part of a tit-for-tat, but this is more like a hammer."

Russian Foreign Ministry spokeswoman Maria Zakharova claims U.S. "special services" intend to search the consulate Saturday. She says that the U.S. also plans to search apartments in San Francisco used by Russian diplomats and their families. Zakharova said that involves the families leaving their apartments for 10 to 12 hours so officials can search.

It had no comment on the black smoke coming from the embassy in San Francisco, which triggered a visit from the San Francisco Fire Department.

A man and a woman exited the consulate Friday and spoke to a reporter from CBS San Francisco. When asked about the burning inside, the woman said, "There is no burning."

Mindy Talmadge, a spokeswoman from the San Francisco Fire Department, said the department received a call about the smoke and sent a crew to investigate but determined the smoke was coming from the chimney.

Talmadge said she did not know what they were burning on a day when normally cool San Francisco temperatures had already climbed to 95 degrees by noon.

"It was not unintentional. They were burning something in their fireplace," she said.

American counterintelligence officials have long kept a watchful eye on Russia's outpost in San Francisco, concerned that people posted to the consulate as diplomats were engaged in espionage.

In addition to Consul Sergey Petrov, the consulate's website showed 13 other Russian officials working at the San Francisco post. When approached Friday, Petrov declined to answer questions about the closure or about what was being burned inside.

Sasha Sobol was among the crowd who went to the consulate Friday morning to renew a Russian passport, but was told the document wasn't ready and turned away by early afternoon.

"It's really too bad because now we are going to have to go to Seattle or Houston," said Sobol, a resident of Sunnyvale with joint U.S-Russian citizenship.