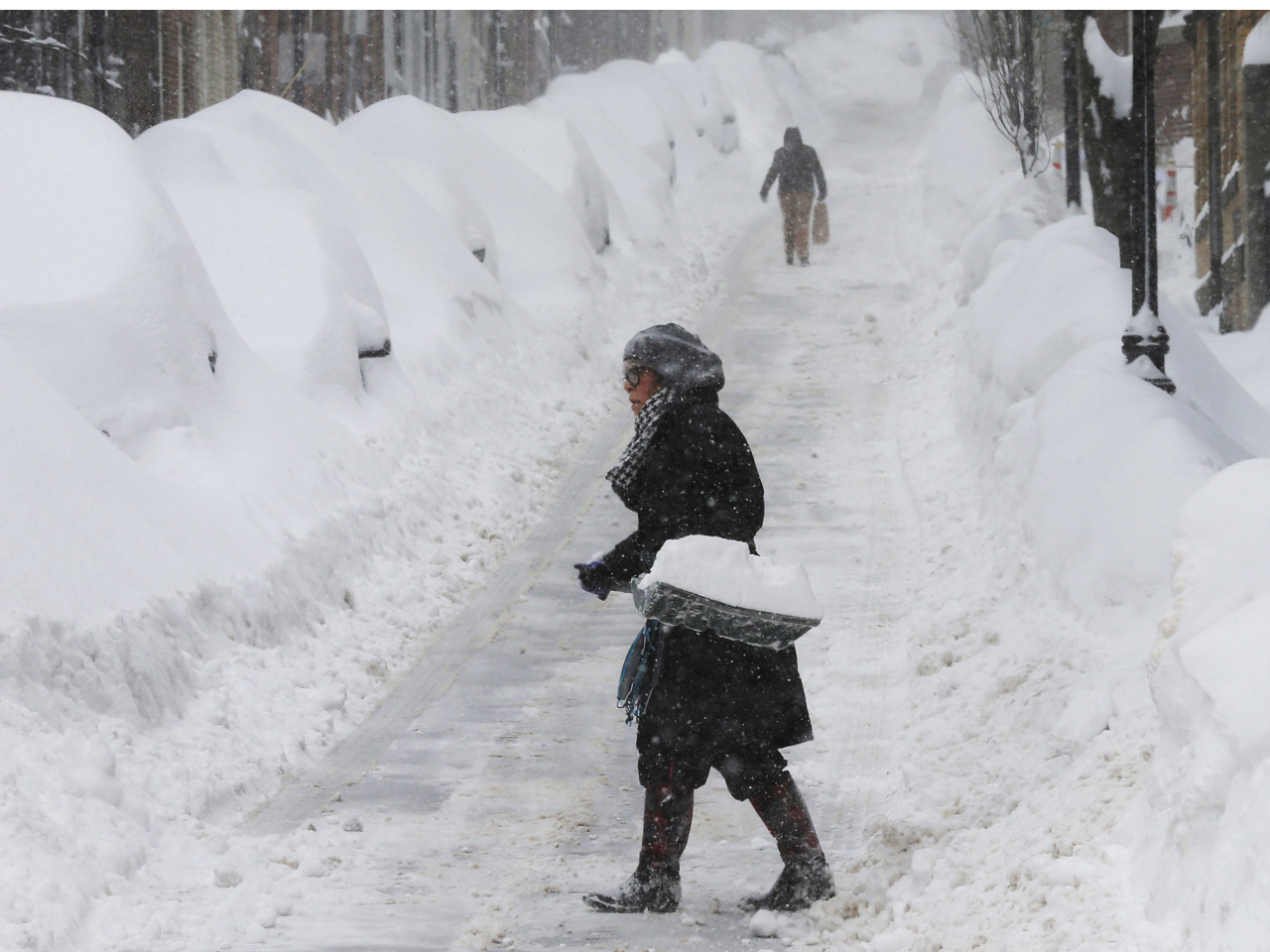 BOSTON -- Frigid cold nipped at New England after the region's fourth winter storm in a month blew through, piling another foot of snow on top of 6-foot-high mounds in Boston, and forecasters said another winter blast might hit midweek.

The bone-chilling blast of cold blew into New England as the last snowflakes fell Sunday.

"The big story is subzero air temperatures with wind chills as low as 20 to 40 below zero," Matthew Belk of the National Weather Service said, adding that exposed skin could start to develop frostbite in "a matter of minutes."

"The big thing is to dress in layers and don't go outside if you don't have to," he said.

In the suburbs, snowblowers were out in force, even on the rooftops, which threatened to cave in under the heavy snow, Duncan said.

Hundreds of flights have been canceled due to the weather. Southwest Airlines canceled more than 150 flights on Monday and spokeswoman Michelle Agnew says Dallas-based Southwest expects the number of cancellations to rise throughout the day. American Airlines spokesman Kent Powell said Fort Worth-based American, US Airways and its regional commuters on Sunday canceled more than 315 flights. He says a dozen or so flights were canceled Monday, but that number was likely to grow.

Meanwhile, a winter mix of ice, sleet and snow was starting to spread Monday around several Southern states, and forecasters warned it could make driving hazardous well into the northern reaches of Georgia, Alabama and Mississippi.

New Englanders were talking in superlatives - harshest, most relentless - with a winter that has tested their mettle.

"It's historic," Frank Libby said as he walked down a deserted street in Boston's Back Bay neighborhood. "I think we're in uncharted territory. People just don't know how to deal with the logistics of it."

Allan Tufankjian of Scituate, Massachusetts, said it's discouraging every time he looks at the forecast.

"If I saw one day that was above freezing, I'd be very happy," he said. "I looked seven days ahead and every single day, the highest temperature I could see is 26 degrees."

The Arctic cold front already had frozen the upper Midwest, with temperatures in Michigan plunging to minus-27 in the Upper Peninsula.

Some areas of New England reported nearly 2 feet of snow from Sunday's storm. Acushnet, Massachusetts got 22 inches, and Salisbury had 20.5. At the easternmost tip of Maine, Lubechad had 2 feet. With many intersections already clogged by soaring snow banks, forces mobilized before the storm to remove piles of snow.

The Massachusetts Bay Transportation Authority said it would resume limited service Monday after the latest in the string of snowstorms forced the agency to suspend service again. Rail service was to operate at most underground stations. The Blue Line was to be open through to Logan International Airport. And the MBTA said commuter rail lines would reopen on a Saturday schedule, as wouldd certain bus routes.

The storm didn't bring the eye-popping snow totals of the previous New England storms this season, but made its presence felt with lightning strikes and strong winds that left visibility close to zero for stretches along the coast.

On Cape Ann, north of Boston, Patrick McGehee said he was awed by lightning strikes early Sunday when he took his dog outside. "I wasn't sure what was going on, if it was some kind of spiritual event or what," said McGehee, the owner of the Mary's by the Sea summer rental business in Rockport. "The whole sky lit up like somebody lit up a lightbulb."

The Coast Guard said it rescued an Australian father-son sailing team whose boat lost power and had its sails torn in 60 mph winds about 140 miles southeast of Nantucket, Massachusetts.

In Vermont, winds forced the shut-down of the Lake Champlain ferry cross between Charlotte and Essex, New York.

In northwestern Pennsylvania, thousands of electric customers were dealing with record cold without power. Scott Surgeoner, spokesman for FirstEnergy, told the Erie Times-News that 5,500 customers in Erie County were without power as of 8 a.m. Monday.

Meanwhile, a 66-year-old woman was found dead in the snow just feet from her home in New Jersey. Police are investigating.

Severe weather was sweeping through much of the South Monday morning. It could drop several inches of snow, freezing rain and sleet and cause major travel disruptions, forecasters warn.

It's the same storm system that brought snow and ice to Missouri late Sunday night.

The National Weather service says the Nashville area could get up to ten inches of snow.

Winter advisories warned of the threat that roads in several areas could become hazardous with sleet and ice in coming hours, recalling a major ice storm about a year ago that trapped motorists in cars and trucks for hours on metro Atlanta freeways. In Mississippi, counties near the Tennessee state line could see as much as three-quarters of an inch of ice from freezing rain, forecasters predicted.

In Georgia, up to a quarter of an inch of ice could accumulate in more than a dozen mountainous northern counties that include cities such as Blairsville, Dalton and Dahlonega, the National Weather Service said in a winter storm warning.

CBS Atlanta affiliate WGCL-TV reported Monday that the storm track was shifting well north of Atlanta today and would push wintry weather across extreme northern Georgia. But, the station said, even though the storm was forecast to bring all rain to Atlanta on Monday, temperatures were then expected to tumble, and the city was likely to have to contend with black ice, and lots of it, come Tuesday morning.

Officials were taking no chances.

The Georgia Emergency Management Agency on Sunday brought in more personnel to the state operations center and planned to operate around the clock.

"We are now 24/7 until we perceive that the threat has diminished, and that may be at least Wednesday but maybe even later in the week," Jim Butterworth, director the Georgia Emergency Management Agency Director Jim Butterworth, told The Associated Press on Sunday.

The Georgia Department of Transportation said it was pre-treating roads with a mixture of salt and water to limit the ability of ice to bond to roadways.

In Mississippi, a winter storm warning said sleet and freezing rain was likely through Monday evening from near Tunica along a line across far north Mississippi. Forecasters said up to a half-inch of ice and an inch of sleet could accumulate, making travel dangerous. They said people also could lose power should ice takes down branches, trees and power lines.

In Alabama, ice could accumulate up to a tenth of an inch thick in some areas, with higher amounts possible near the Tennessee border, the weather service said in a winter weather advisory for northern parts of the state. The Alabama National Guard, emergency officials and law enforcement agencies were all put on alert ahead of the storm, Gov. Robert Bentley said in a statement.

Alabama residents "should have an emergency preparedness kit in their vehicle in case travel is necessary while winter weather is impacting the state," Alabama Emergency Management Agency Director Art Faulkner said in a statement.

Sleet was turning to snow in the Nashville area early Monday.

Farther south, in New Orleans, forecasts of rain prompted authorities in one of that city's suburb to reschedule some of Monday's pre-Mardi Gras parades early to beat rain in the forecast for later in the day.

"We could get some rumbles of thunder, some lightning and brief, heavy rain," said National Weather Service meteorologist Phil Grigsby in southeast Louisiana. He predicted temperatures that reached the 70s recently in south Louisiana could drop to the 30s and 40s in the region for a while early in the week.