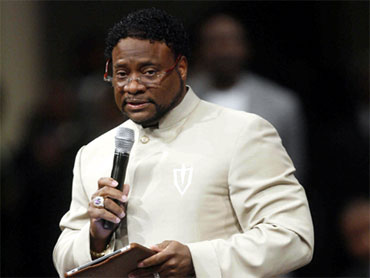 NEW YORK (CBS) Dozens of people joined the pastor of a small South Carolina church at a rally on the steps of the Georgia state Capitol Sunday, calling for the resignation of Bishop Eddie Long, who has been accused of luring four young men into sexual relationships when they were teenage members of New Birth Missionary Baptist Church, according to a report.

Bishop "Prophet" H. Walker of True Light Pentecost Church in Spartanburg, S.C., claimed Long "had no right to continue as a leader of the Christian church," and urged members of Long's congregation to demand that the pastor step down from his position, reports the Atlanta Journal-Constitution.

Nearly 75 people attended Sunday's rally, with the majority of the attendees being members of Walker's church. National Association for Religious Accountability founder, Minister Adisa Franklin, questioned why no other Atlanta pastors were present at Sunday's rally, reports the Atlanta Journal Constitution.

According to the paper, Walker, who says his church is opposed to homosexuality, said the purpose of the rally was to "support the integrity and character of the Christian faith," and claimed Long was a "bad influence on the Christian church and future generations."

Four young men allege Long, their pastor, first adopted them as his "spiritual sons," then abused his "spiritual authority" and seduced them with cars, lavish trips and jewelry in exchange for sex, which he allegedly justified with Holy Scripture.

"What the parents didn't know was that part of being a son is actually an abusive emotional and physical relationship with the children," plaintiff's lawyer B.J. Bernstein told CBS News. All four teens were older than Georgia's age of consent, which is 16.