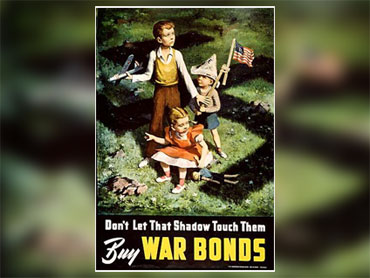 The federal government is facing a lawsuit over billions in unclaimed bonds that date back to the patriotic fundraising efforts of World War II, leading to a showdown between states who say they should be given the money and a Treasury Department that claims ownership.

World War II sparked an unprecedented bond buying campaign, spurred on by one of the largest advertising campaigns ever seen - a drive wrapped in dutiful pleas from celebrities, politicians and cartoon characters alike.

Most American families bought at least one bond at the time and many never cashed them in - thanks in part to a 40-year maturity in the bonds. And those same "Series E" war bonds continued to be sold by the federal government until 1980.

More than $16 billion worth of the bonds are unclaimed, either lost or forgotten about with the death of the original purchasers.

The state attorneys general suing the Treasury Department charge that the federal government made no effort to find those people. They want the money given to the states, who have a legal system in place for finding the owners of unclaimed funds.

"It's better for the millions of American who are the rightful owners to have it returned to the states, because the states will make a real effort to find them," said David Bishop, a partner at Kirby McInerney who is representing the states in the suit. "And if after searching for them they can't find them, the money can go to work in the communities where the bonds were purchased."

The Treasury Department counters that it indeed tries to find owners of the unclaimed bonds, and says it has a Web site where people can simply type in their Social Security number to see if they have one. And it points out that the money is not just laying around somewhere.

"One of the misunderstandings out there is that there is a lot of cash sitting somewhere in a drawer. Money from savings bonds was used to run the daily operating expenses of the government," said Joyce Harris, with the Bureau of the Public Debt. "These are obligations of the federal government, not the states. There is no pot of gold out there just waiting for someone to grab it."

The Treasury also points out that most of the unclaimed bonds are far more recent than the original World War II-era bonds. And overall, 99 percent of people claim their bonds.

And those who don't cash them often choose to do so for tax reasons, or perhaps out of a sense of patriotism, Harris said.

It's not like the states will get the money free of obligation ¡ about $55 million in the case of Montana.

The states would be obligated to pay bondholders no matter if it takes them decades - or longer - to show up. In the meantime, though, states usually earmark the interest earned on such unclaimed money for schools or other purposes.

Steve Bullock, the attorney general for Montana, said states - not the federal government - have legally been granted the right to deal with unclaimed money.

"First and foremost I think it is the right thing to do. I think it is money that should be with Montanans," Bullock said. "It's an important action to bring just to protect the state's interest.

The complaint was first filed in Federal court in New Jersey in 2004 with New Jersey and North Carolina as the plaintiffs. Montana, Kentucky, Oklahoma and Missouri later joined the case. All states would benefit if the lawsuit is successful.

The case will come down to constitutional arguments. Attorneys for the federal government are arguing the states don't have standing on what they see as a contract issue between the original purchasers and the Treasury Department.

The states expect arguments in the case to be made later this year on a motion from the federal government to dismiss the case.
By Associated Press Writer Matt Gouras