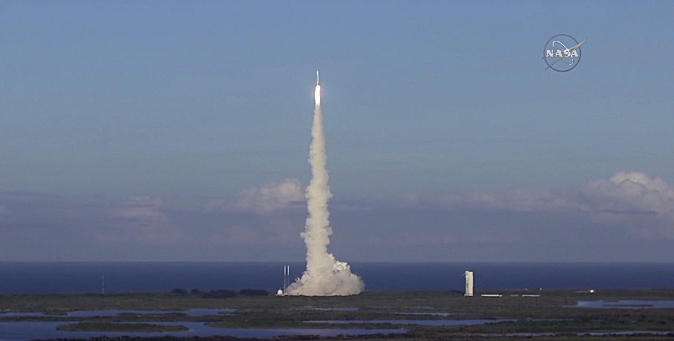 An Atlas 5 rocket thundered into space Thursday, launching a sophisticated robot on a two-year journey to a small, potentially hazardous asteroid, the first step in a billion-dollar mission to study a remnant of the solar system’s birth, to collect a sample that may include the organic building blocks of life and return it to Earth for analysis.

“This was superb to watch,” NASA Administrator Charles Bolden told the launch team. “I just want to thank everybody, the whole team, for what you have done and what you’ve started. We’ve got a long time ahead of us, but I plan to be in a rocking chair seven years from now and watch the (sample) capsule as it comes back and lands up in Utah. Again, I cannot thank you enough.”

Putting on a spectacular sunset sky show, the Atlas 5’s Russian-built RD-180 first stage engine, augmented by a single solid-fuel strap-on booster, ignited with a torrent of flame at 7:05 p.m. EDT (GMT-4), quickly pushing the rocket away from complex 41 at the Cape Canaveral Air Force Station.

The launching came just one week after a SpaceX Falcon 9 rocket exploded on its launch pad just 1.5 miles away, destroying the booster and its $195 million satellite payload in a spectacular conflagration. So far, SpaceX has provided no details on what might have gone wrong or how much damage was done to the launch pad.

Tim Dunn, NASA launch manager for the OSIRIS-REx mission, said a detailed walkdown of the Atlas launch pad area found no debris or any other indication of an “elevated risk” and the rocket was cleared for flight.

Arcing away to the east through a generally clear sky, the Atlas 5 quickly accelerated as it consumed its load of first-stage propellants, powering its way out of the dense lower atmosphere and putting on a thrilling show for thousands of NASA guests, area residents and tourists along Florida’s Space Coast.

A bit more than four minutes later, the first stage fell away and the rocket’s hydrogen-fueled Centaur second stage took over with the first of two firings to boost the OSIRIS-REx spacecraft to an Earth-departure velocity of 14 miles per second.

At that point, about 59 minutes after takeoff, OSIRIS-REx was released from the second stage to fly on its own. Four minutes later, its two solar panels unfolded to begin battery charging and a few minutes after that, the spacecraft began sending telemetry down to a ground station in Canberra, Australia.

“This is a great day,” said Geoffrey Yoder, NASA’s acting science chief. “The solar arrays are deployed, it’s powered up, we’re communicating with the spacecraft and so far, everything’s looking great.”

OSIRIS-REx is NASA’s first attempt to send a spacecraft to a nearby, potentially hazardous asteroid in an attempt to collect a sample and return it to Earth.

In an astronomical high five of sorts, the spacecraft’s 10-foot-long robot arm will reach out and briefly touch asteroid Bennu in 2020, two years after arrival, using a jet of nitrogen gas to stir up surface material and direct it through a filter, capturing up to 4.4 pounds of ancient soil.

If all goes well, that precious sample will be returned to Earth in September 2023, the largest return of extraterrestrial material since the Apollo moon program. One quarter of the sample will be studied by U.S., Canadian and Japanese collaborators while the rest will be stored for future analysis.

“Sample return is really at the forefront of planetary exploration,” said Dante Lauretta, the principal investigator. “Not only are we going to get this material into our laboratories for precise chemical analyses that can’t be duplicated by spacecraft instruments, but this is going to be a treasure trove of information and material for scientists yet to come.”

OSIRIS-REx was launched into the plane of Earth’s orbit around the sun. To reach Bennu, which orbits in a plane tilted 6 degrees from Earth’s, OSIRIS-REx must first travel all the way around the sun and then make a gravity-assist flyby of Earth on Sept. 22, 2017, passing within about 12,400 miles. In so doing, it can use Earth’s gravity to gain the energy needed to change the plane of its orbit.

During the flyby, Lauretta said, OSIRIS-REx’s instruments will be turned on again for detailed checkout and calibration, giving mission scientists and engineers a chance to rehearse operations that will be needed during the Bennu encounter and at the same time collect useful observations of the Earth and moon.

“It is a great opportunity for us to check out our whole instrument suite,” Lauretta said. “We have a fantastic calibration and observation campaign, both of the Earth and the moon.”

OSIRIS-REx is expected to reach Bennu in August 2018. It will spend two years mapping the asteroid’s surface with a high-resolution camera, two spectrometers, a laser altimeter and an X-ray imaging system to characterize the minerals and compounds present and to select potential sampling sites.

Finally, in July 2020, the spacecraft’s robot arm will reach out and briefly press its sample collector against the surface.

Shaped like an inverted cake pan, the collector will use a jet of nitrogen to stir up the soil beneath it during the three to five seconds it’s in contact with Bennu. As the gas exits through vents, suspended material will be captured in filters.

After backing away, OSIRIS-REx will direct the robot arm to deposit the sample collector in an aerodynamic sample return container identical to one used several years ago to return samples from a comet.

Once the asteroid samples are safely in place, the in situ science will come to an end and OSIRIS-REx will simply wait for Earth and Bennu to reach the proper positions in their orbit to begin the return trip in March 2021.

The spacecraft will reach Earth in September 2023, dropping the sample container off for a high-speed plunge to the Utah Test and Training Range about 80 miles west of Salt Lake City.

Once on the ground, recovery crews will fly the sample container to the Astromaterials Acquisition and Curation Office at the Johnson Space Center in Houston, where Apollo moon rocks are stored, split up the sample so some can be stored and subject the rest to two years of detailed analysis.

A key element of the OSIRIS-REx mission -- the acronym stands for Origins, Spectral Interpretation, Resource Identification, and Security-Regolith Explorer -- is to search for organic compounds thought to have been present in the original cloud of gas and debris that formed the solar system.

Organic molecules have been found in meteorites, but Lauretta said exposure to Earth’s environment “confuses” the analysis. Collecting pristine samples from Bennu should help resolve the matter.

“One of the leading theories for delivery of organic molecules to the surface of the Earth is delivery from asteroids and comets,” Lauretta said. “Meteorites, once they’re on the surface of the Earth, are very quickly contaminated, organically. Microbes love these materials. The things we’re looking for are the things these bacteria are made out of, the amino acids that make up their proteins.

“We’re really interested in what were (in the) original inventory of materials, the seeds of life these carbon-rich asteroids and comets may have brought to the surface.”

OSIRIS-REx also will map the global distribution of various compounds making up the surface, or regolith, of Bennu in a pathfinder study that could play a role in future asteroid mining ventures.

And because near-Earth asteroids like Bennu pose a potential threat to Earth, the OSIRIS-REx team will study how solar heating and cooling can change its trajectory slightly. Since Bennu was discovered in 1999, its trajectory has change by about 100 miles due to this “Yarkovsky Effect.” OSIRIS-REx is expected help researchers improve tracking techniques and their ability to predict future close encounters.

Kindle Fire has a surprising number of preorders

How loud is too loud when listening to music?