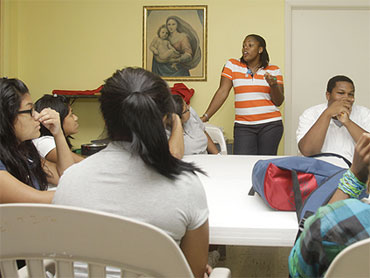 A pair of Democrats introduced legislation in the House and Senate Tuesday to cut off funding for abstinence-only sexual education, which they said had wasted more than $1.5 billion over the last 15 years.

"Abstinence-only education doesn't work and is a poor use of federal funding," said Senator Frank R. Lautenberg (D-NJ), who sponsored the bill in the Senate. "Our nation's young adults deserve access to information that helps them take on real life situations and make smart decisions."

"We need to get serious about educating our young people about sex," added Rep. Barbara Lee (D-Calif.), the House sponsor. "Abstinence-only programs fail to address the challenge of unplanned pregnancies and sexually-transmitted infections among our youth, which have reached a critical level."

The bill, known as the Repealing Ineffective and Incomplete Abstinence-Only Program Funding Act, would redirect $50 million spent annually on abstinence-only sexual education to "evidence-based, comprehensive sex education programs," according to a release from Lautenberg. The release cites as evidence that abstinence education doesn't work the relatively high teen pregnancy rate in the United States as well as the HIV infection rate among those under the age of 29.

A national study authorized by Congress and released in 2007 concluded that abstinence-only sexual education, which had been supported by the administration of President George W. Bush, did not keep teenagers from having sex.

But last year, a different study found that abstinence-only education helped delay the sexual initiation of some middle-school students.

As the Washington Post reported last March, however, a little-discussed provision in the health care overhaul legislation directed $250 million over five years for abstinence-only programs.

The bill introduced Tuesday, which has seven cosponsors in the Senate and 20 cosponsors in the House, comes as Republicans work to eliminate funding for Planned Parenthood, which provides reproductive health care, including abortions. The House voted last month to eliminate funding for the group, and social conservatives have been pushing Republicans to ensure that it does not receive federal funding in the budget now being hashed out in Congress.