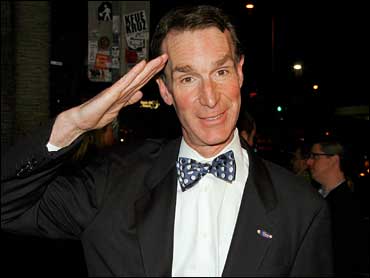 When "Bill Nye the Science Guy" conducts an experiment, it always seems to have a positive outcome. But apparently things don't always run that smoothly in his personal life.

It began on "The Late Late Show with Craig Ferguson." Nye announced his engagement to musician, author, and motivational speaker, Blair Tindall.

Nye surprised Tindall with a spontaneous wedding in 2006, which was officiated by super-star Pastor Rick Warren.

But for some reason, the marriage wasn't legal and neither Nye nor Tindall will say why.

"We were never married," Nye told Early Show national correspondent Hattie Kauffman. "We got a letter from the State of California, with the great seal affixed, that we were never married. So shortly afterwards we both agreed it was not a good idea."

Well, maybe not both of them. Nye says his distraught ex-wife-that-never-was poured a toxic liquid into the garden behind the house they both owned, a substance Tindall later said was weed killer. Nye took out a restraining order against her. He says she was "dressed in black and wearing a black hat" and "she fled on foot when I called her name."

There was an allegation that Tindall intended to throw poison onto Nye's face or sprinkle it in his eyes. Tindall filed to have the restraining order lifted claiming that "stress and fatigue" clouded her judgment.

"I became very angry, and could only think of destroying the rose garden, so he couldn't give another woman the roses which I had cared for," she said.

The battle is reminiscent of another "War of the Roses," a movie about a bitter divorce that escalates into violence. But in this case, Tindall says "I meant to hurt his flowers only, not him."

"We need not export just these fascinating stories about celebrities," Nye said. "In my case, I emphasize we were never divorced because we were never married."

This ex-couple goes to court on Dec. 20 and family law attorney Tina Schuchman says Tindall may have a difficult time.

"She apologized but she also says she had emotional problems," Schuchman said. "She said she went into some kind of counseling, and rehab, but she does admit to having emotional problems, that may cut against her and not help her case."

Banderas Back In Mexican Western