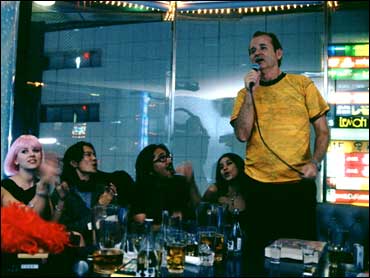 Actor Bill Murray created a small sensation in the Scottish town of St. Andrews, joining Scandinavian students at a late-night party and even helping to wash the dishes, a newspaper reported Sunday.

The Sunday Telegraph reported that the 56-year-old actor, in St. Andrews for a celebrity golf event, was drinking with fellow golfers in the fashionable Ma Bells bar when he met Lykke Stavnef, a 22-year-old Norwegian student, who was out with a friend.

To her surprise, the star of "Lost in Translation" (in which Murray plays a lonely middle-aged actor in Japan who befriends a young American woman and goes partying with her) accepted her invitation to a party and accompanied her along the city's cobbled streets to a Georgian townhouse, where a gathering overflowing with young Scandinavians was in full swing.

"Nobody could believe it when I arrived at the party with Bill Murray," Stavnef, a social anthropology student, was quoted as saying. "He was just like the character in 'Lost in Translation.'"

She said Murray was happy to drink vodka from a coffee cup, then to help wash dishes in the cramped kitchen. The Sunday Telegraph article is accompanied by a photograph that appears to show Murray, dressed in a checkered shirt and a brown vest, washing a metal pot at the sink.

As news spread around the city that Murray had showed up at the student party, the house became crowded with people wanting to meet the star of "Ghostbusters" and "Groundhog Day," the article said.

"The alcohol ran out very quickly when word got round that he was with us," said Agnes Huitfeldt, 22, an economics and finance student told the Telegraph.

"He was joking with me about reheating some leftover pasta and how drunk everyone was," said Agnes Huitfeldt, 22, another partygoer.

Tom Wright, 22, another college student, said: "The party was overflowing with stunning Scandinavian blondes. He seemed to be in his element, cracking lots of jokes. It was the talk of the town the next day."

Shortly after doing the dishes, Murray left the party, the students said.

The Chelsea Hotel: Inside an urban utopia