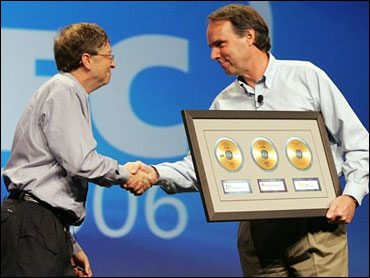 Gates' speech was more of a rallying cry than technical briefing to an audience made up mostly of engineers working on next generation hardware products, gathered in Seattle for four days of technical seminars.

Microsoft has a great deal invested in this trio of new products, which will hit the market between the end of this year and early 2007. But to succeed, it needs the support of a wide group of companies that are part of what Gates refers to as the "Windows ecosystem."

Gates started his talk by reminding the audience how the PC is changing with better support for telephony (voice over Internet), bigger and better screens, built-in wireless connectivity and drives that can read and write both standard CDs and DVDs and (soon) high-definition DVDs.

He pointed out that instead of replacing the PC, the plethora of new mobile digital devices — such as digital cameras, camcorders and Smart Phones — actually enhance the role of the PC. That's because it is becoming the core of the digital home – the place where you store and load all that data.

Gates even tied in the PC to globalization. "As the world globalizes, the tool that allows that to happen is the software ecosystem running on the PC." Gates said that more than 250 million PCs will be shipped this year, 10% higher than the previous year.

As he has for the past several years, Gates touted the "tablet" PC, which is a combination of writing pad and laptop PC. Microsoft hopes to make this a mainstream product with widespread adoption by students and office workers. But Gates admitted that it's mostly being adopted in vertical markets such as health care and insurance, where a tablet PC with a stylus makes a great deal of sense.

The Microsoft chairman showed off a number of portable products from the company's hardware partners including a $99.99 "dual mode" Uniden home phone (Win 1200) that can make calls via the Internet or via a standard landline.

The phone works with an upcoming version of the Windows Live Messenger service to make PC to PC calls and can also be used to make PC to landline calls for a small fee or as a regular landline when connected to standard phone service.

Gates predicted that over time PBXs ("private branch exchange" — the hardware system that many companies use as their electronic telephone switchboards) will be like mainframes in the sense that there will be less and less of them. He predicts that Internet protocol-based phone calls with PC software in control will eventually take the place of "the specialized limited capability that a PBX would support."

With its upcoming products Gates stressed that his company has put an enormous amount of effort into security and that he is "very proud of the progress we've made facing down these problems in a way that no one else has." He says that Microsoft developers "went through a methodology for design and testing that brings security up to a whole new level."

Windows Vista will feature a number of enhancements including a service called "Sideshow" that can be used to display photos, text, reminders, stock quotes and other data on external screens connected to the PC.

These can include LCD displays on the cover of a laptop (so you can see some data even when the PC is turned off) or external displays such as an electronic picture frame that can sit near the PC displaying your favorite photos from your PC's picture collection.

Another feature of Vista will allow users to quickly set up an ad-hoc network between portable and desktop PCs in the same room. Rather than having to go through the hassle of connecting to a network, devices with wireless networking capability will be able to discover each other and exchange files in real time — making it possible for people in meetings, for example, to quickly send around files for collaborative work.

Another innovation in Windows Vista is technology that supports "hybrid drives" such as one introduced at the show by Samsung Semiconductor that include a standard hard disk with non-volatile flash memory.

These drives, according to Microsoft and Samsung, use flash memory as a buffer or cache to temporarily store data so that the drive, instead of spinning the entire time the PC is running, has to do so for only a few seconds every few minutes, to copy data from the memory to the drive platters.

The advantages to this technology are said to include an extra 8 to 10 percent of battery life on laptops as well as less wear and tear on the drives which should improve overall reliability.

Computers should be faster and, based on a demo at the conference, applications should load much faster because parts of the program can be stored in the drive's flash memory which is faster than the hard drive itself. Also, if a laptop is dropped, the user is less likely to lose data because the drive is less likely to be in a read or write mode where it is more vulnerable to shock damage.

Microsoft along with AMD, Intel and Transmeta also used WinHEC to introduce "FlexGo," a new business model for selling "pay as you go" PCs into developing countries. Instead of having to pay the full cost up front for a new PC, consumers in countries such as Brazil will be able to buy full featured PCs for about 30% of their regular price and pay on an hourly basis for use. Once the PC is fully paid for the meter would stop running and the family would own the computer.