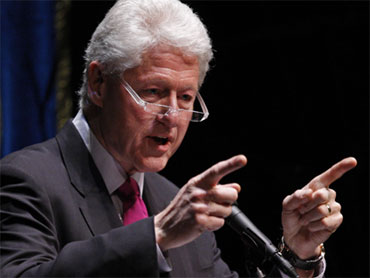 Former President Bill Clinton said during a panel discussion in South Africa that it may become necessary to blow up the Deepwater Horizon well that continues to spew oil into the Gulf of Mexico.


Watch the video at left. His comments on the leak start about 2:30 in.

"Unless we send the Navy down deep to blow up the well and cover the leak with piles and piles and piles of rock and debris, which may become necessary - you don't have to use a nuclear weapon by the way, I've seen all that stuff, just blow it up - unless we're going to do that, we are dependent on the technical expertise of these people from BP," Clinton said.

There has been some pressure for BP to simply blow up the well, with critics suggesting the company is forgoing that option out of a desire to get as much oil as possible from the rig.

"If we demolish the well using explosives, the investment's gone," former nuclear submarine officer and a visiting scholar on nuclear policy at Columbia University Christopher Brownfield said in a Fox News interview in May. "They lose hundreds of millions of dollars from the drilling of the well, plus no lawmaker in his right mind would allow BP to drill again in that same spot. So basically, it's an all-or-nothing thing with BP: They either keep the well alive, or they lose their whole investment and all the oil that they could potentially get from that well." (He penned an opinion piece in the New York Times making the argument.)

Some lawmakers have also pushed for blowing up the well.

"For the life of me, I can't understand why BP couldn't go into the ocean floor, maybe 10 feet lateral to the -- around the periphery -- drill a few holes and put a little ammonium nitrate, some dynamite, in those holes and detonate that dynamite and seal that leak. And seal it permanently," Rep. Phil Gingrey (Ga.) said earlier this month.