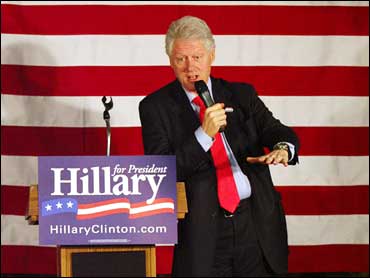 Former President Bill Clinton made it clear he's had it with complaints that his wife's campaign is playing a dirty game of racial division, CBS News anchor Katie Couric reports.

"This is crazy. This rhetoric is getting a little carried away here," Clinton said.

"She did not play the race card, but they did," he said.

According to reports, a South Carolina Democratic official who supports Barack Obama claimed the Clintons were borrowing a page from the Republican playbook: injecting race into the campaign.

That, apparently, was too much.

"This, this is almost like once you accuse somebody of racism or bigotry or something, the facts become irrelevant," Clinton said.

He suggested the Obama campaign and accomplices in the news media were promoting the charge.

"They're feeding you this because this is what you want to cover; this is what you live for, but this hurts the people of South Carolina," he told a reporter. "What you care about is this and the Obama people know that, so they spin you up on this and you happily go along."

"The people don't care about this. They never ask about it," he said. "And you are determined to take this election away from them." (

The former president, with a habit of grabbing headlines as if he's a candidate himself, was clearly not pleased, Couric reports.

The exchange happened as Clinton was campaigning on the coast of South Carolina.

"I never heard a word of public complaint when Mr. Obama said Hillary was not truthful," and had "no character, was poll-driven. He had more pollsters than she did," the ex-president added. "When he put out a hit job on me at the same time he called her the senator from Punjab, I never said a word."

It was not clear what he meant by "hit job."

The former president has accused Obama of exaggerating his anti-war record and handing out undeserved praise to Republicans. Clinton said he personally witnessed Obama's union forces intimidating Nevada caucus-goers and said an Obama radio ad suggested how Democrats could keep votes from his wife.

Last year, Obama's campaign circulated a memo describing Hillary Clinton as "D-Punjab," a reference to her Indian-American donors. Obama has said that was a mistake.

Bill Clinton said civil rights leaders Andrew Young and John Lewis have defended his wife. "They both said that Hillary was right and the people who attacked her were wrong and that she did not play the race card, but they did," he said.

The Obama campaign strongly denied it's trying to make issues out of race or gender and called the Clinton charges "a sideshow."