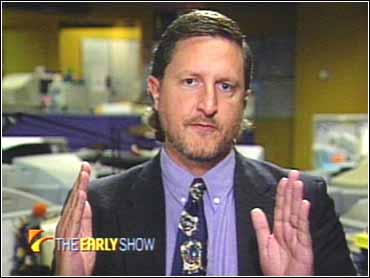 Grants Pass, Oregon, psychologist Matthew Johnson is insisting he did hear, smell and see the Pacific Northwest's mythical Bigfoot while hiking during the July 4th weekend with his family at the Oregon Caves National Monument.

"We had just completed the tour of the Oregon Caves and decided to hike up the mountain about a mile or so on the Big Tree Loop Trail," he told CBS News Early Show co-anchor Jane Clayson Monday. "That's when we ran into the smell that was very strong like a skunk but a lot worse."

Bigfoot, or Sasquatch, is the name given to a large, hairy, ape-like creature reportedly living clandestinely in the woods of the Pacific Northwest.

Johnson says Bigfoot paralleled his family on an animal trail about 40 feet away and for about 10 minutes walking, making "whoo, whoo" noises.

He then went ahead of his family, and saw what he says is Bigfoot.

"I saw this tall, dark hairy creature walk from behind one tree over to another one then peered its head out and was looking at my family," he said.

And he's sure it was Bigfoot and not just a bear.

"I had 20 years of residency in Alaska with a lot of hunting and camping and fishing experience and [was] chased by a grizzly bear six years ago," he responded. "I know what they look like and smell like and sound like. This was not a bear."

But his family didn't see it.

"I know it's hard to believe and people don't want to believe Bigfoot exists but that's why I chose to go public," he insisted. "It does exist and we need to get rid of the social stigma associated with making reports. People should be able to feel free to make reports without being labeled as crazy."

"This year, we already have had 19 reports from the Pacific Northwest alone. Of those we have thoroughly investigated nine of them and learned a lot," Crook said.

Crook estimates the animal on the Lower Hoh Indian Reservation, along the Pacific Coast in extreme northwest Washington state, stands about 8 feet, with feet 17 inches long and 7 inches wide. With the imprint that was left in the ground, he estimates its weight to be about 600 pounds.

That sounds about right to Johnson, who went back to the Oregon trail two days later with an investigator, and found footprints.

"I'm six-feet nine-inches and I have size 16 feet and the prints made my size 16 shoes look small," he said on The Early Show.