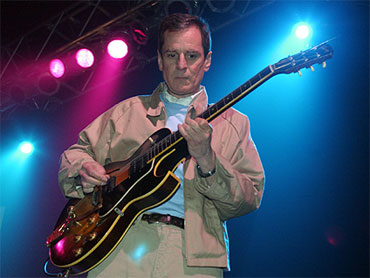 Alex Chilton, the singer and guitarist who had a No. 1 hit as a gravel-voiced teen with "The Letter" and went on to influence a generation of musicians through his work with Big Star, died Wednesday in New Orleans. He was 59.

The Memphis, Tenn., native died at a hospital after experiencing what appeared to be heart problems, said his longtime friend John Fry.

Chilton had his first taste of fame with the Box Tops, the band he and his friends started in Memphis. He was 16 but sounded much older when "The Letter," which opens with the lines "Gimme a ticket for an aeroplane. Ain't got time to take a fast train ..." hit the top of the charts in 1967. Their other hits were "Soul Deep" and "Cry Like a Baby."

"He wanted to do his own thing," Moman said in an interview Thursday. "He didn't want to do those kinds of songs we were doing. Sometimes that's more powerful than the money you receive for a hit record."

It was Chilton's work with a second Memphis band, Big Star, in the early 1970s that cemented his legacy as a pioneering voice for a generation of kids looking for something real in the glossy world of pop music. The band was never a commercial success, but R.E.M. counted Chilton as an influence, the Replacements name-checked him with their 1987 song "Alex Chilton," and his band still provides a template for musicians today.

"In my opinion, Alex was the most talented triple threat musician out of Memphis -- and that's saying a ton," Paul Westerberg, the former Replacements frontman, said in an e-mail to The Associated Press. "His versatility at soulful singing, pop rock songwriting, master of the folk idiom, and his delving into the avant garde, goes without equal. He was also a hell of a guitar player and a great guy."

Chilton's influence was widely felt in the 1980s and 1990s, when a generation of listeners looked to songs like "Thirteen," "I'm in Love With a Girl" and "In the Street" (widely known as the theme song for "That '70s Show") because they perfectly captured teen angst and relayed sometimes-dark emotions that were universal.

"There was this feeling of yearning," said Lou Barlow, a member of the bands Dinosaur Jr. and Sebadoh. "The songs were beautiful and the melodies were just almost like intuitive."

Big Star's three 1970s albums all earned spots on Rolling Stone magazine's list of the 500 greatest. In addition to sporadic solo work, Chilton reformed Big Star with members of The Posies in the 1990s to tour and released "In Space" under the Big Star name in 2005. A box set of the group's work was released last fall.

"Alex was an amazingly talented person, not just as a musician and vocalist and a songwriter, but he was intelligent and well-read and interested in a wide number of music genres," said his friend Fry, the owner of Memphis-based Ardent Studios.

Chilton said in a 1987 interview with The Associated Press that he didn't mind flying under the radar with Big Star and later as a solo artist.

"What would be ideal would be to make a ton of money and have nobody know about you," he said. "Fame has a lot of baggage to carry around. I wouldn't want to be like Bruce Springsteen. I don't need that much money and wouldn't want to have 20 bodyguards following me."

Chilton had been scheduled to perform with Big Star on Saturday at the South by Southwest music festival in Austin, Texas.

"Alex Chilton always messed with your head, charming and amazing you while doing so. His gift for melody was second to none, yet he frequently seemed in disdain of that gift," the festival's creative director, Brent Gulke, said in an e-mail.

Sadness over Chilton's passing was felt all the way to Capitol Hill, where U.S. Rep. Steve Cohen of Memphis said in the House: "He did it his own way, independent, iconoclastic, innovative ... He is the embodiment of Memphis music. Hard, different, independent, brilliant, beautiful. We're lucky he came our way."

Barlow said he was unexpectedly "blindsided" by emotions when he heard of Chilton's death and that many of his musician friends felt the same way and used Facebook to share their favorite songs.

"People had no idea how much emotion would hit them," he said in a phone interview from Austin, where he is attending South by Southwest. "It was like a tidal wave."

Barlow said the emotional honesty of Chilton's songs attracted a wide range of fans in the music world. Covers by bands as diverse as sunshine popsters The Bangles ("September Gurls") and the alt-country outfit Son Volt ("Holocaust") show the breadth of his influence.

Barlow's favorite was a rendition of "Thirteen" by the late Elliott Smith, whose musical style leaned heavily on Big Star.

"There were just these moments in Alex Chilton songs that were so beautiful and so lonely, a real authentic feeling that sometimes when other people have in their songs feel self-indulgent or not real," Barlow said. "But when Alex Chilton did it, it was like, 'Whoa, this is so real."'