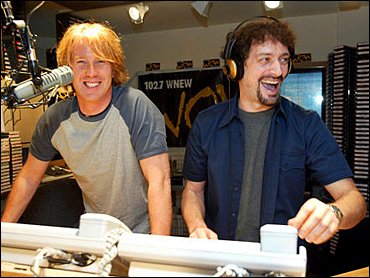 The government on Thursday proposed the second-biggest fine ever for indecency: $357,000 against Infinity Broadcasting for a radio segment in which a couple was said to be having sex in New York's St. Patrick's Cathedral.

The Federal Communications Commission responded to an outpouring of complaints following an August 2002 broadcast of the "Opie and Anthony" show over New York's WNEW-FM and 12 other Infinity radio stations. The nationally syndicated show was canceled a week later and DJs Greg "Opie" Hughes and Anthony Cumia were fired.

Four commissioners voted for the fine. The fifth said the agency should have gone after Infinity's licenses instead.

"Infinity's actions here were unquestionably willful and egregious," Commissioner Jonathan Adelstein said. "These callous actions show a high degree of culpability and a deliberate attempt to heighten the shock to listeners. They clearly offended community standards."

"Infinity/Viacom could pay this entire fine by tacking just one more commercial onto one of its prime-time TV shows and probably pocket a profit to boot," Copps said. "Unless the FCC takes these cases seriously and initiates revocation hearings, stations will know that they don't have to take the law seriously."

Infinity Broadcasting and CBSNews.com are both owned by Viacom Inc.

Infinity has 30 days to pay the fine or appeal. It would be the second-largest fine ever for indecency, trailing only the $1.7 million Infinity paid in 1995 to settle several cases against Howard Stern.

A call to Infinity Radio was not immediately returned.

The commission also proposed fining AMFM Radio Licenses, now part of Clear Channel Radio, $55,000 for two broadcasts on WWDC-FM in Washington in which the "Elliott in the Morning" program interviewed female students about sexual activities at their high school, including references to oral sex. Copps again dissented, saying the commission should try to revoke the station's license rather than impose a fine.

A call to Clear Channel was not immediately returned.

Adelstein said he would propose changing FCC regulations to make it clear that each program segment found to be indecent would be considered a separate violation subject to a $27,500 fine. In the current cases, the FCC proposed to fine each station once for each whole program broadcast.

The radio producer who was on the scene at St. Patrick's Cathedral, Paul Mercurio, later pleaded guilty to disorderly conduct and was ordered to perform seven days of community service. The man and woman who allegedly had sex in the landmark church were also charged. Before he was to appear in court last month, Brian Florence, 38, died at his home in Alexandria, Va. His girlfriend, Loretta Lynn Harper, 36, was expected to plead guilty to a minor charge and avoid jail time, their lawyer, Maranda Fritz, said.

MMIII The Associated Press. All Rights Reserved. This material may not be published, broadcast, rewritten, or redistributed