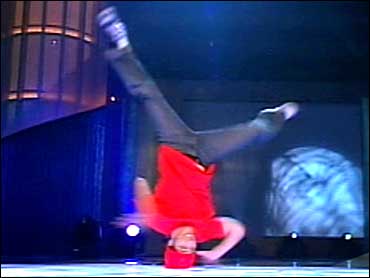 Giving up an appearance in a Jennifer Lopez video paid off for 19-year old Jon Cruz, who gave a head-turning performance in the "Star Search" Young Dancer competition.

And 12-year old David Archuleta proved to host Arsenio Hall that even a white boy from Utah has "soul."

David says he just feels pleasure when he sings. "I really like just the feeling when the music just makes you want to just feel it and it makes other people really happy. And it just makes everyone feel good inside."

Jon, too, enjoys sharing his passion with others: "If they are happy for a second, you know, I did my job." Jon credits dancing as the outlet that kept him out of gang life.

"Just because if I was in the gangs, I wouldn't be doing what I love. And dancing is what I love," he says. To be on "Star Search," he turned down an offer to do a Jennifer Lopez video.

"I had to choose between J-Lo and this gig, he says. The folks at 'Star Search' said they really liked me, so I decided this is where I needed to be. 'We like you, we want you to come to the show.' I took the chance."

His energetic performance, a combination of hip-hop attitude and break-dancing moves, earned him 17 points from the judges and another 17 from Internet voters.

And David's soulful rendition of the Jackson Five song "Who's Loving You," earned him 18 points from the judges, plus another 16 from Internet voters.

David says his love for music comes from his family. His father plays the trumpet and his mother sings Latin music. "She's really into dance," he says and notes that his aunt sings as well. They were all at the competition cheering him on.