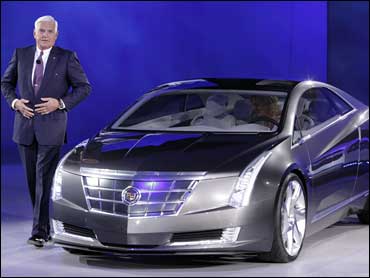 Ford on Sunday detailed a multi-prong electric car strategy, saying it will have an all-electric commercial van by 2010, an all-electric passenger car by 2011, and plug-in hybrid vehicles in 2012.

The firm, which is healthier financially than GM or Chrysler, partnered with Magna International to develop an electric passenger car that can go 100 miles on a charge from lithium-ion batteries. Ford will add hybrid versions of existing cars, including the Fusion Hybrid and Mercury Milan.

To help establish consumer interest in electric cars, Ford said it is partnering with utility Southern California Edison to test a fleet of plug-in vehicles and has established partnerships with city governments in China to promote sustainable technologies and cities.

General Motors on Sunday showed of a concept Cadillac Converj which will be able to drive 40 miles off lithium-ion batteries. It will be outfitted with the same extended-range electric powertrain planned for the Chevy Volt.

GM also introduced a four-door "mini car" called the Chevrolet Spark, originally a concept called the Chevy Beat, which will be available in Europe in 2010 and in the U.S. in 2011

On Monday, GM is expected to announce that it will begin manufacturing car batteries in Michigan, according to reports. Japanese and Korean manufacturers have gotten the upper hand in car battery production, prompting auto companies and politicians to call for programs to encourage U.S. lithium-ion battery manufacturing.

Toyota at the auto show said that it will bring a small all-electric car to market in 2012 and test plug-in hybrid Priuses with lithium-ion batteries later this year.

Chrysler, meanwhile, at the auto show on Sunday showed a concept electric sedan called the 200C EV with a streamlined interior dashboard. The company also plans to have an electric edition of its Jeep Patriot as well.

Martin LaMonica is a senior writer for CNET's Green Tech blog. He started at CNET News in 2002, covering IT and Web development. Before that, he was executive editor at IT publication InfoWorld.
By Martin LaMonica