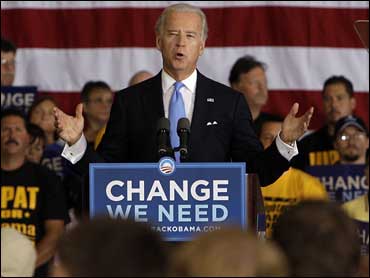 Biden blamed the Bush administration for inaction in the face of sharp cuts in automotive jobs and said McCain, like the president, was out of touch with economic suffering.

Speaking to hundreds of people in a sweltering high school gym in the Detroit suburb of St. Clair Shores, the Delaware senator decried "a culture in Washington where the very few wealthy and powerful have a seat at the table and the rest of us are on the menu."

Biden said McCain's economic programs are virtual copies of those of the past eight years under Bush and serve the rich.

"John McCain stands with George Bush firmly in the corner of the wealthy and well-connected," Biden said. "He stands with the oil company CEOs who swore to me, under penalty of perjury, that they didn't need tax breaks to explore for oil."

Republican spokesman Chris Taylor said Obama and Biden would damage the economy with higher taxes. "Michiganders have seen what Democrat-led taxes can do to a local economy," he said.

"The campaign a person runs says everything about the way they'll govern," he said. "John McCain has decided to bet the house on the politics perfected by Karl Rove."

Biden was referring to a series of attack ads from the McCain campaign as well as misstatements that the Republican presidential candidate and running mate Sarah Palin have continued to repeat after they were debunked. Barack Obama's campaign particularly bristled at an ad suggesting the Democratic nominee favored teaching kindergartners about sex before reading, based on a bill he supported that would teach age-appropriate sex education to those kids and help them ward off sexual predators.

Despite his reputation for bare-knuckle politics, Rove said Sunday that both sides are being too negative and McCain has gone "one step too far" in showing ads that are not true.

Biden said he came to McCain's defense in 2000 when the Republican came under attack from Bush operatives and supporters who spread "scurrilous" rumors about him in the primary campaign. "And now, some of the very same people and the tactics he once deplored, his campaign now employs."

Later Monday, Biden planned to tour a Mazda auto assembly plant and to speak at a campaign stop in Flat Rock, south of Detroit.