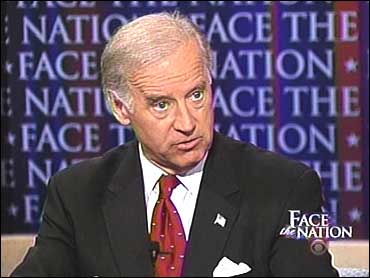 A leading Democratic senator says the chance of a filibuster against Supreme Court nominee Samuel Alito has increased because of comments Alito made in a 20-year-old document about reapportionment.

"I think he's got a lot of explaining to do, and depending on how he does, I think will determine whether or not he has a problem or not," said Sen. Joseph Biden, a member of the Senate Judiciary Committee, which plans confirmation hearings in early January.

In 1985, Alito was applying to become deputy assistant attorney general in the Reagan administration. In the document, he boasted that while working as an assistant to the solicitor general, he helped "to advance legal positions in which I personally believe very strongly."

Drawing the most attention from Alito's critics today is his comment on abortion (pdf).

"I am particularly proud of my contributions in recent cases in which the government argued that racial and ethnic quotas should not be allowed and that the Constitution does not protect a right to an abortion," wrote Alito, now a federal appeals court judge.

But Biden, D-Del., said he was most troubled by Alito's comment about reapportionment under the Supreme Court when it was led by Chief Justice Earl Warren.

The Warren Court, as it became known, ended public school segregation and established the election principle of one-man one-vote.

"The part that jeopardizes it (Alito's nomination) more is his quotes in there saying that he had strong disagreement with the Warren Court particularly on reapportionment — one man, one vote," Biden told "Fox News Sunday."

"They are now feeling very strong, the Democrats, so I wouldn't be surprised if he gets a tougher ride than we originally thought," said Borger.

In the document, Alito wrote, "In college, I developed a deep interest in constitutional law, motivated in large part by disagreement with Warren Court decisions, particularly in the areas of criminal procedure, the Establishment Clause and reapportionment," he said.

Biden said the chances of a filibuster against Alito had increased because of Alito's assertions in the document.

"If he really believes that reapportionment is a questionable decision — that is, the idea of Baker v. Carr, one man, one vote — then clearly, clearly, you'll find a lot of people, including me, willing to do whatever they can to keep him off the court. ... That would include a filibuster, if need be," Biden said.

The Supreme Court, in a 6-2 decision in 1962 in Baker v. Carr, ruled that arbitrarily drawn legislative districts can be challenged in federal court.

Back on trail, Senate candidate admits his "life could have ended"
Thanks for reading CBS NEWS.
Create your free account or log in
for more features.
View CBS News In
CBS News App Open
Chrome Safari Continue
Be the first to know
Get browser notifications for breaking news, live events, and exclusive reporting.