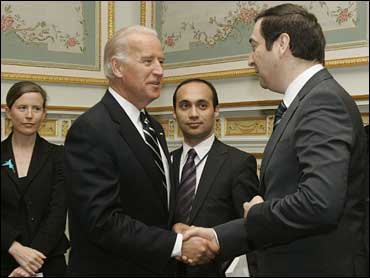 Biden told the allies the United States was open to talks with Taliban moderates as part of a new approach, echoing comments made by President Barack Obama over the weekend.

"It is worth engaging and determining whether or not there are those who are willing to participate in a secure and stable Afghan state," Biden said.

Biden solicited ideas from European allies during a one-day round of talks at NATO and EU headquarters on amending a troubled military strategy in Afghanistan and bringing more allies on board to fight the Taliban-led insurgency.

Biden told NATO's top decision-making body that the situation in Afghanistan and neighboring Pakistan was worsening, adding, "The deteriorating situation in the region poses a security threat from our respect not just to the United States, but to every single nation around this table."

"It was from that remote area of the world that al Qaeda plotted 9/11 and subsequent attacks" in Europe and elsewhere.

Biden also said "we need to look at Afghanistan and Pakistan together because success in one requires progress in the other."

He spent three hours with the ambassadors of the 26 member nations of NATO, seeking their input as part of a strategic review of U.S. policy in Afghanistan that Obama promised after taking office in January. The review will be completed before an April 3-4 meeting of the NATO leaders in France and could be presented at a special conference on Afghanistan which is likely to be held in The Netherlands at the end of the month, EU officials said.

In his speech, Biden said the Obama administration will be eager to engage NATO allies in global security discussions, marking a departure from eight years in which Washington was seen as pursuing a go-it-alone course that upset its European allies.

"President Obama and I are deeply committed to NATO. Let's get that straight right from the start," Biden told the North Atlantic Council - the panel of NATO ambassadors.

Biden said Americans view a terrorist attack in Europe "as an attack on the United States. That is not hyperbole ... So please understand that this is not a U.S.-centrist view that only if America is attacked is there a terrorist threat."

He said he came to hear ideas from the allies on how NATO can bring stability to Afghanistan.

"It is from that area that al Qaeda and its extremist allies are regenerating in conceiving new atrocities aimed at the people around the world from Afghanistan, Pakistan and India to the United States, Europe and Australia," he added.

After the NATO meeting, Biden ate lunch with senior officials at EU headquarters to further discuss the Afghan war.

EU officials said they could provide more police trainers, judges and other judicial experts to improve the rule of law in Afghanistan. The EU plans to increase its police training mission in Afghanistan from 180 to 400.

His visit, less than a week after U.S. Secretary of State Hillary Rodham Clinton met with senior NATO and EU officials here, highlights the new priority that diplomatic outreach to allies has become for Washington.

Officials said Biden did not make a direct appeal for extra troops. Obama has ordered 17,000 more U.S. troops to Afghanistan to bolster the 38,000 already there. NATO has about 25,000 non-American troops in the country and Washington's allies have been reluctant to increase their troops levels.