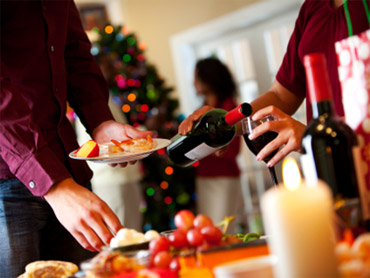 It's that time of year again -- time for your office holiday party.

It's a tricky thing. You want to relax and have fun, but you don't want to be talked about at the water cooler the next day.

On "The Early Show" Tuesday, career expert Nicole Williams offered advice to help you have a great time, without putting yourself in any embarrassing spots:

The office holiday party is more significant than any old party. Your audience is bigger than you'll ever experience normally at work. Everyone who works there attends, plus clients, plus possible spouses, etc. And your boss is there. So, it's a great opportunity to really network and humanize yourself.

But the gatherings have a bad reputation. Some people feel obligated to go, so they go grudgingly, and hate it. And some folks take advantage of the free alcohol, or feel they deserve to get drunk, and end up making fools of themselves. Remember that "Seinfeld" episode where Elaine dances and, the next day, everyone is making fun of it? You don't want to do that. Some people see it as just a party, instead of an opportunity to advance your career.

You should dance, but, obviously, only if there's music. And even then, you don't want to be the first -- or last -- one dancing.

Extend yourself: Don't hang with the same group of people. This is an extraordinary networking opportunity. Introduce yourself to people you don't know. It's a social party, so take a deep breath and know that you are going to have to introduce yourself.

Have a drink in your hand: Always have a glass in your hand, even if it's not alcohol. This is a social event, and you don't want to make those having a drink feel uncomfortable. But be aware of your limits.

Don't talk shop: Don't complain about work, don't talk about work. This is the time to ask people about their lives. They will be flattered that you care. And then you get to know more about them.

Don't get too personal: This is the flip side, though. Don't ask personal questions, or tell super-personal things about yourself. Keep private matters to yourself.

Don't dress provocatively: This is a work function. Dress festively, but not provocatively. You know your office, and you know what's appropriate for during the day. Those same general guidelines should apply at night, as well.

If you're going as someone's guest, and don't know how to dress for their office, judge what's appropriate day-to-day in that type of office place. Companies involved in areas such as fashion, marketing, or creative endeavors can be allow for a little more provocative dress than companies in areas such as accounting, or law.. But always err on the side of bring too conservative. If you want to stand out, do that with a great color or accessory, not with cleavage or too much leg showing.

If a drunk co-worker says something offensive or acts inappropriately, keep it to yourself if it involves office information you know you shouldn't know. That's the best rule of thumb. If someone flirts with you, and it's obvious that they've had too much to drink, don't rat them out. Chances are, they'll apologize the next day or not even remember. Keep it to yourself, and just make sure it was a one-time only thing. But obviously, let them know when it happens that you aren't interested. Don't give them any mixed signals.

Leaving: You don't want to be the first or last to leave. When the party feels really good, that's the best time to leave. You have to judge based on whether you've you met enough people and made enough of an impact. You don't want people asking the next day, "Where were you?"

Unless a significant other has been expressly invited, don't bring them. The economy is bad, and lots of companies are cutting back. Also, if there are career-advancing opportunities, you don't want to have to drag your partner around with you and babysit him or her.