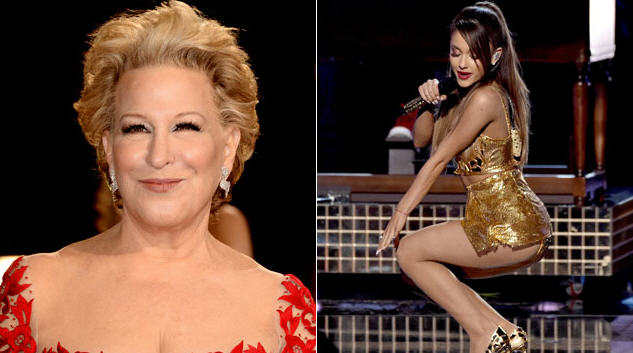 The diva didn't hold back when talking to The Telegraph about the breakout pop star, saying that her sexy image is "ridiculous."

"It's terrible!" the 68-year-old entertainer told the publication. "It's always surprising to see someone like Ariana Grande with that silly high voice, a very wholesome voice, slithering around on a couch looking so ridiculous. I mean, it's silly beyond belief and I don't know who's telling her to do it."

Giving Grande a little credit, Midler added that she realized that the 21-year-old singer's public persona was probably less Grande's doing and more how her manager was pitching her to the press. "I wish they'd stop. But it's not my business, I'm not her mother. Or her manager," she said. "Maybe they tell them that's what you've got to do. Sex sells. Sex has always sold."

The diva, who just released an album where she covers songs from girl groups, also lashed out at the Spice Girls. "I couldn't think of a girl group that was modern who had a song as meaningful as [the one by] TLC," she said. "I couldn't find one. I mean, who are you talking about? The Spice Girls? ...I like Destiny's Child. I think that was the last great girl band there was."

Midler did leave her interview on a high note. Offering up a bit of advice to younger female entertainers. "Trust your talent," she said. "You don't have to make a whore out of yourself to get ahead. You really don't."

Grande did show a more mature side to her music when she did a piano accompaniment rendition of her songs "Problems" and "Break Free" at Sunday's 2014 American Music Awards. Go here to see which other females dominated the AMAs stage.