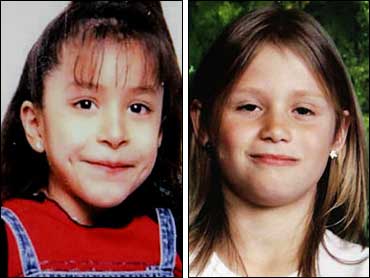 A pair of second-graders rode their bikes all day, stopping to draw in chalk on a neighbor's garage and riding into a typically safe park, people in the small, northern Illinois town of Zion say.

But when neither 8-year-old Laura Hobbs nor her friend Krystal Tobias, 9, returned home at dusk, their parents alerted the Zion Police Department and set off a massive search.

Their bodies were found shortly after 6 a.m. lying side by side, both stabbed multiple times and left to die off a bicycle path in a park, Lake County Coroner Richard Keller said. There is no evidence of sexual assault on either victim, Keller said.

A resident walking through a wooded nature area in Beulah Park discovered the bodies, Deputy Police Chief Clyde Watkins said. A bike path and a ravine run through the area, which police cordoned off Monday.

Zion police chief Doug Malcolm calls it a "heinous crime" and says "no stone will be left unturned" as they try to find the person or persons responsible.

The Zion Police Department has no suspects, and when asked at a press conference if a murderer was on the loose, replied: "Well, we have two murdered children and no arrest."

Keller said, upon preliminary examination, the deaths appear to have occurred in the early morning hours of Monday — perhaps at 1 or 2 a.m., opening up the possibility that the girls were detained for the evening before being stabbed to death. A bicycle was found nearby, but officials are not certain if it belonged to one of the girls.

Jim Goetz, who lives across the street from Beulah Park, told the Chicago Tribune he last saw the two missing girls about 9 a.m. Sunday. They rode their bicycles to his house to play with his 7-year-old daughter.

At one point, Goetz told the Tribune, he scolded the children for drawing in chalk on his garage and made them clean it off. An hour later, the two visiting girls rode away on their bikes, saying they were going to ride by the ravine in Beulah Park.

"They were best friends," said Laura Unrein, who lives near the park. "When one left, the other left. They were always together."

"They were very sweet girls," said Julie Dobnikar, who teaches second grade at the school. Dobnikar added that the girls' teacher is "very distraught right now."

School was in session Monday and that adults would escort children home at the end of the school day. No child would be allowed to leave unescorted, she said.

At the Beulah Park school Monday afternoon, dozens of anxious parents in Illinois have been waiting outside an elementary school, eager to see their children and shaken by news that two second-graders were found killed.

Many parents say they're worried about the safety of their own kids after the sudden disappearance and murders.

Jeanette Ortiz said she is worried because her 11-year-old son plays and rides his bike in the same park. She came to the school to pick him up.

"I'm going to have to tell him that he needs to be careful no matter where he goes," she said.

Neighbors around the park say it's been a quiet and safe place for decades.

Social workers and a crisis intervention team have been called to help the students.

Brent Paxton, a Lake County Board member who lives across the street from the nature area, said the neighborhood is generally safe and quiet, and his three young children play in the park.

"Obviously, if it was random act, somebody just picking up kids in the park, I would be very concerned about that," Paxton said.

Zion, about 45 miles north of Chicago, has about 22,000 residents. Nestled near Lake Michigan, the community was founded in 1901 by a religious faith healer as a utopian community. It retains a quiet, at times rural feel despite being on the edge of both the Chicago and Milwaukee metropolitan areas.