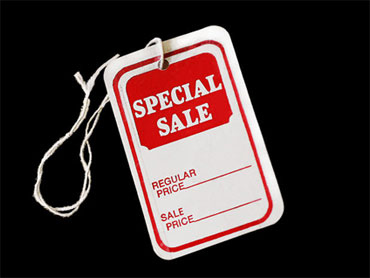 You may be feeling all shopped out after the holiday season, but you don't want to miss out on all the bargain basement prices in January!

Right off the bat, Lewis notes that, because January features so many great deals, it's the perfect time to use up those gift cards you received, before you forget about them!

She says a great source for more info on these bargains is AOL's Walletpop.com, especially this piece!

Most consumers in the market pull the trigger in time to have it in place for holiday entertaining. Come January, the phone is likely not ringing at the local carpeting store with the exception of people going all out for the Super Bowl and they're probably after bigger screen TV's first. So, it's a good time to negotiate good rates on carpeting and flooring and you could be pleasantly surprised how quickly they're able to install orders with material in stock.

It feels like Joseph A Banks is practically giving suits away -- and they're not alone. It's almost time to clear out warm weather suits and make room for spring styles. So, suits should be on clearance. Often tailoring is thrown in, but you might consider holding off on that piece depending on how confident you are you'll be the same size this time next year.

We should all be so lucky to have this on our shopping list! The boat shows are coming up and dealers will have to recoup the cost of being involved/on display there. The window of time when they might really be slowest, could be right now.

Depending on the model, a slightly more affordable recreational item and widely on sale right now. Most people don't think of getting a new bike, until they take their old one out for a spin in the Spring and then take it in for repairs ... while it's being repaired they spot all the new models. Right now, a lot of stunning bikes are on sale because shops slow down post-Christmas and there's not a lot of foot traffic in the store driven by repairs.

The winter white sale -- a real deal? Turns out the tradition dates way back to the 1800's when John Wannamaker of department store fame invented it. Now, stores like Macy's and Sear's tell us they really will be offering some of the best prices of the year on things like sheets, duvets, pillows and towels. In many cases, as much as 70 percent off.