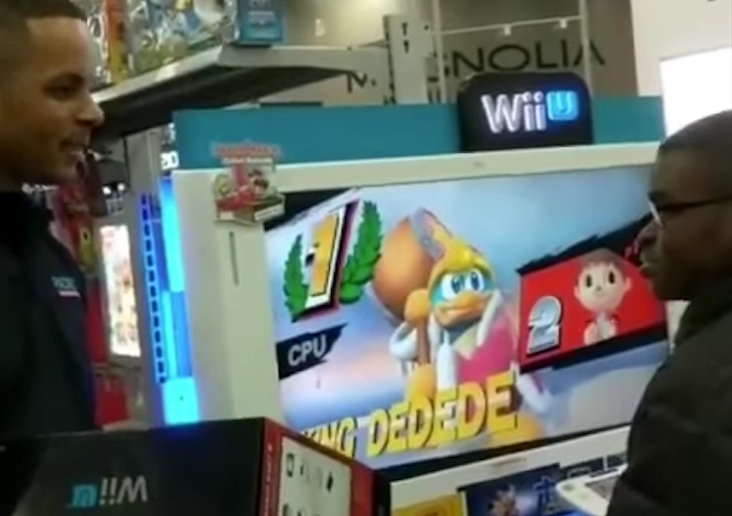 Employees at a Best Buy store in Valley Stream, New York, know the “regulars” who visit frequently, but no one compared to one teenage boy who popped in almost daily just to play Wii.

His eyes would be glued to the Nintendo Wii U gaming system. It was like nothing else in the world mattered.

Over time, the employees got to know the young man, and as a group, they decided to do something special.

As an early Christmas present, some employees pooled money together to buy the boy a Wii U, including a copy of his favorite game, “Super Smash Bros.” The product is listed at about $300 on the store’s website.

Rahiem Storr, a manager at the store on Long Island, posted a video of the gift presentation on YouTube. More than 1.5 million people have watched the video since it was posted on Dec. 7.

“On behalf of all of us here at Best Buy, we got you a Wii U so you don’t have to come here every day and play, ” an employee could be heard saying on the video. “This is something that we did for you. Everybody here that you see, we all got together and chipped in so you could have it.”

The teen looked at them in disbelief.

“I’m being serious,” the employee added, while holding the large box and a receipt in his hands.

With a nervous smile, the boy wiped a tear from his face and accepted. “Yes. Thank you.”

Cautiously, he finally took the large box, as the employee explained that the Wii included a two-year warranty.

“The employees in this store saw an opportunity to make a child smile and did just that,” Storr wrote. “They chipped in and purchased a Wii U for him with their own money. This is amazing.”

The video has been flooded with more than 1,000 comments — some positive, and unfortunately, more than a few negative.

In a follow-up video, Storr urges any online “trolls” see the good in this story.

“They could have just as easily done nothing for him,” he said. “Did your mother never say to you, ‘If you don’t have anything good to say, don’t say anything at all.’”

Best Buy has not yet returned CBS News’ request for comment on this story.