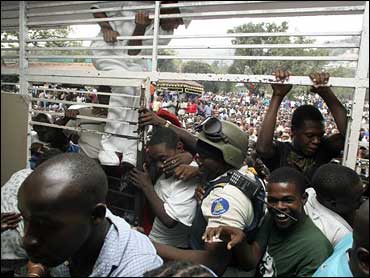 And when Yogi Berra says it's over, it's over.

With those two words and a simple handshake, the Yankees Hall of Fame catcher put an end Tuesday to his 14-year feud with George Steinbrenner.

The rift began when the Boss fired Berra as New York's manager only 16 games into the 1985 season. The man who made popular the phrase "it ain't over 'til it's over" had stayed away from Yankee Stadium ever since.

In appropriate setting, the Yogi Berra Museum on the campus of Montclair (N.J.) State University, Steinbrenner came to reconcile.

"I didn't realize how much I'd screwed up. It was a major screw-up. It was a stupid thing on my part," the Yankees owner said. "It was a monumental mistake on my part. Sometimes, it takes a long time to get things right. Yogi is a highly principled man. I messed up."

"I'm just happy he feels it's time to put this behind us," he said, standing next to Berra for an interview on WFAN. "I'm glad he's said, `George, I forgive you.'"

Berra has not been at Yankee Stadium for an official function since he was replaced by Billy Martin with a 6-10 record in 1985, though he has occasionally showed up to visit friends.

There's no word yet, but look for Berra to be back at the ballpark this year, throwing out a first ball and appearing at Old-Timers Day.

"I told him how much I wanted him to come back to Yankee Stadium again, where he belongs," Steinbrenner said. "I didn't feel right winning the World Series last year annot having Yogi there."

"I'd like to have him sitting with me sometimes, just to talk about what's going on," he said. "He is a treasure."

And Berra wanted to make this clear: He never stopped rooting for his old team, for which he won three AL MVP awards.

Last summer, before a Yankees-Mets interleague game at Shea Stadium, Berra seemed to indicate a possible thaw in his Steinbrenner freeze. The official end came Tuesday when Steinbrenner flew in from Florida and met for 15 minutes with Berra and his wife, Carmen, at the museum.

After that, Berra gave Steinbrenner a 45-minute tour of the building on the campus of his adopted alma mater. Steinbrenner said he was impressed with the items on display, including uniforms, bats and the mitt he used to catch Don Larsen's perfect game in the 1956 World Series.

"I could spend a whole day here," Steinbrenner said. "I'm going to start sending him some stuff."