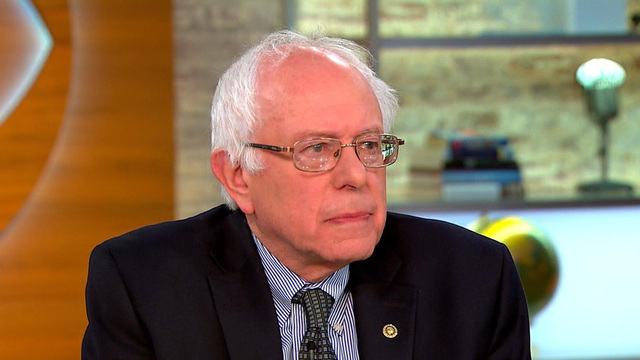 Bernie Sanders says he has not yet read the 28 pages that are redacted from a congressional report on 9/11 that a number of lawmakers are demanding be declassified -- even though he has access to the pages.

Asked in an interview on "CBS This Morning" if he should read them if he's running to be commander-in-chief, Sanders said, "The difficulty is, you see then, if you read them, then you're gonna ask me a question, you're gonna say, 'You read them, what's in them?' And now I can tell you honestly I have not."

Even though he hasn't read the documents, he acknowledged that there is speculation that the 28 pages "may indicate that parts of the Saudi family may have funded some of the terrorists."

Sanders said he supports legislation pending in the Senate that would allow the U.S. to sue any government that may have been involved in terrorism that kills Americans. The Obama administration, meanwhile, opposes the bill, and Saudi Arabia has threatened to retaliate financially if the bill passes.

The issue of the 28 pages has attracted more attention recently in light of a recent 60 minutes segment in which some lawmakers and families of 9/11 victims called for their declassification.

In the interview, Sanders also slammed the election law that will prevent independent voters from casting votes in New York's primary on Tuesday.

"It's bad New York state election law. What it says to the many hundreds of thousands or more independents who would like to vote tomorrow for me or for anybody else -- they can't participate," the presidential candidate said.

"I think that that's wrong and that does hurt us because we win independent voters about 2 to 1," Sanders added, in effect lowering expectations a little for the outcome.

Only registered Democrats and Republicans can participate in their respective party's primary on Tuesday in New York. Every state sets its own rules, and one of the reasons why Sanders has performed well in states that hold caucuses is because independents are usually allowed to participate. A CBS News battleground tracker poll released Sunday found that Clinton has a 10-percentage-point lead ahead of Sanders in New York 53 to 43 percent.

Asked how bad the Democratic primary process is in terms of delegate allocation, Sanders said, "I have serious problems with it. You know, this is the establishment, folks."

He was referring to the superdelegates -- elected officials who can choose to support any candidate they want -- who overwhelmingly support Hillary Clinton.

Sanders said that even if he loses New York, he plans to go all the way to the Democratic National Convention in Philadelphia this July.